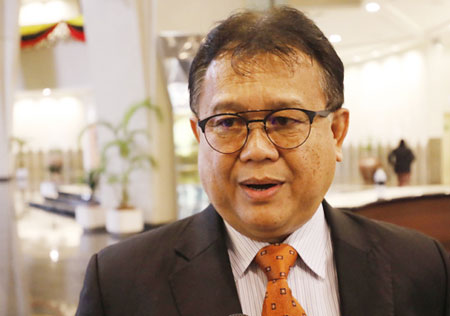 This is by virtue of the fact that only 13 opposition MPs stood up to demand a vote and this was two MPs short of the minimum number of 15 that is required by the rule of the meeting to make it compulsory for it to be balloted, he explained.

“The Budget 2021 was voted by voice only. It was duly passed without having to undergo actual counting of votes.

“It is commendable and to be appreciated that the larger number of the opposition actually decided to give way to the passing of Budget 2021,” the Minister of Domestic Trade and Consumers Affairs told The Borneo Post.

Opposition Pakatan Harapan (PH) Pokok Sena MP Mahfuz Omar had initiated a bloc vote but it failed to materialise because it lacked the required support.

“The opposition must have realized that there are too many good and beneficial propositions in the Budget 2021 to ignore or to downright reject it,” Nanta stressed.

“Indeed the Budget 2021 do contain numerous goodies for the people to withstand the problems and burden caused by the Covid-19 pandemic situation as well as to enable Malaysia’s economy to recover meaningfully,” said Nanta who is also Parti Pesaka Bumiputera Bersatu (PBB) secretary-general.

Nanta said he was glad that the Budget had been passed so that the Parliament session could go on without too much interruptions.

“Indeed there are many other Bills that are useful and important for the benefit of the Rakyat and Malaysia’s socio-economic management and development.”

The budget, the first tabled by the Perikatan Nasional (PN) government led by Prime Minister Tan Sri Muhyiddin Yassin, is Malaysia’s biggest yet at RM322.5 billion.

“The passing of the Budget, as I see it, is not necessarily to show solid political support for Prime Minister Tan Sri Muhyddin Yassin but more of allowing the PN federal government to carry on with addressing the problems and burdens caused by the Covid-19 pandemic on the people and the economy.

“I do believe that to some extent the opposition do take into account the possible repercussions by the people on them if the Budget is not passed.”

The assistance to the people and to the business community could be disrupted and stopped altogether if the Budget 2021 failed to get through, he added.

The budget will be now debated at the committee stage for 10 days starting Monday.

When asked to explain the process, Nanta said it simply means the ministry stage whereby the details of the budget including the operating expenditures and the development expenditures will be debated upon.

“So beginning on Monday next week, the debates will start with the Prime Minister’s Office, followed by other senior ministries.”

“Every ministry’s budget shall be debated, scrutinised and be wounded up by the respective Minister or by the Deputy Minister immediately after the end of the last debate on that particular ministry.”

At the committee stage all debates are to be short and focused on the details of the expenditures and or development only, he said.

“There is no more touching on the policy or policies. Committee by Committee means Ministry by Ministry and this is where the devil is. The devil is in the details. Voting is to be called at the end of each Ministry’s matter. This will be going on till Dec 15,” Nanta said.

When asked if the Budget 2021can still be dropped at the committee stage, Nanta replied: “Every committee or Ministry budget, there is the need to vote to pass it, usually by voice only is enough. But the opposition can also demand for actual voting.”