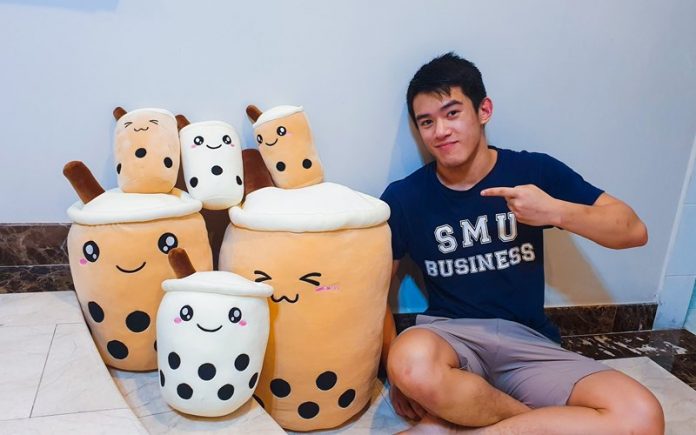 Even restaurants choose to bank on what feels like a never-ending bubble tea craze by introducing bizarre-sounding concoctions such as bubble tea pizza, bubble tea hotpot and buttermilk crab with bubble tea pearls. Oh, the sheer horror!

However, amid all the craze and cravings for bubble tea or boba, one observant and entrepreneurial Malaysian took the sweet opportunity (pun intended) to make a fortune by selling adorable soft toys fashioned after the beloved beverage.

During his internship, 23-year-old Chan Tze Hing found himself with a lot of time to spare during the weekends – time which he felt could be used to focus on getting extra income.

Hours upon hours of research later, he settled on dropshipping, a business model that involves product arbitrage from China to Western countries.

Struck and inspired by this ‘aha’ moment, Chan immediately worked on a website, got it up and running and went on to open a bunch of different stores catering to different needs.

He found himself selling an array of bubble tea-themed phone cases, kitchen appliances like handheld knife sharpeners and mixed martial arts apparel, but unfortunately, none of what he was offering was making a decent profit.

Refusing to give up, he continued to source for more products online in the hopes of finding something that would sell. The search went on and on until one fine day at the end of April, he found himself staring intently at an adorable, smiley-faced bubble tea plush toy.

Even further research showed Chan that only two suppliers were selling plush toys at the time.

It was a once-in-a-lifetime lightbulb moment, and Chan wasted no time. He immediately contacted the suppliers to obtain more information on its quality and sizing.

With enough information gathered and plushies up on his Subtle Asian Treats website (not to be confused with the Facebook page called ‘subtle asian traits’), Chan began facilitating and running advertisements for them on the same day.

“I started marketing the product the day I discovered it. As it was brand new, I knew no one else was selling it, which meant I had a first-mover advantage,” said Chan.

It was a good move on Chan’s part and he was proven correct, as he woke up the next morning to a double return of investment… and it didn’t stop there.

“The day after that, my return on investment quadrupled! This was when I knew it was the magic product.”

The plushies, which come in three extremely adorable ‘flavours’ and four cup sizes, had customers snapping them up the same way they slurped up bubble tea when it first started gaining popularity. And despite the pandemic hitting the economy hard, Chan’s store took off like the bubble tea trend itself.

As of Nov 27, 2020, he has sold a total of 3,684 bubble tea plush toys with the United States accounting for 80% of all the sales. Purchases from Canada and Australia came in at second and third place respectively.

Product demand and adorability aside, Chan considers himself a customer and consumer first and understands the importance of transparency – which influenced how successful his business had become.

“I was honest about where my products were coming from and how long the products take to reach their destination. More than that, my website had completely authentic reviews.”

The last thing Chan expected was for his venture to blow up especially during the Covid-19 pandemic, but he remains grateful that despite multiple failures, his hard work and perseverance finally paid off.

Plus, Chan no longer needs to run advertisements as purchases are still being made on a daily basis. The entrepreneur believes this is due to having a branded store, which made him an authority in the bubble tea plush toy category.

“The biggest factor which pushed me to start my own business was the concern that my academic results alone were not sufficient to secure the job that I wanted.

“I also wanted to prove that academic results alone do not determine how much a person can make or how successful he will become.”

Well, the next time somebody tells you that nothing good would come out of your boba obsession, tell them the story about how this Malaysian entrepreneur managed to find success through it.

But, jokes aside, Chan proved that the recipe for success was about sensing an opportunity and pursuing it until he got what he wanted. Above all else, he still kept his integrity and continues to reap the benefits of his decisions.

If you happen to be a boba lover, take the obsession up a notch and own your very own huggable boba as proof of your dedication! After all, they are indeed the cutest little – or big, depending on what size you prefer – things.

Get your hands on the adorable bubble tea plush toys by checking out the Subtle Asian Treats website here.