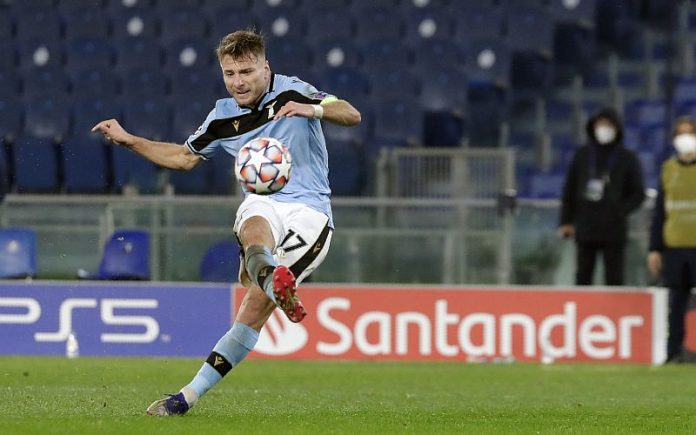 ROME: Ciro Immobile scored his fifth Champions League goal this season as Lazio reached the last 16 for the first time in two decades on Tuesday with a 2-2 draw against 10-man Club Brugge in Rome.

Immobile scored Lazio’s second goal from the penalty spot at a rain-drenched Stadio Olimpico after Joaquin Correa had put the hosts ahead on 12 minutes.

But it was a hard-fought match with the Italians twice pegged back against a Belgian side who played nearly an hour a man down after Eduard Sobol’s sending off before the break.

Ruud Vormer had cancelled out Correa’s opener after quarter of an hour with a Hans Vanaken header on 76 minutes not enough for the visitors to advance.

Lazio finished second in Group F behind Borussia Dortmund, booking their spot in the knockout rounds for the first time since the 1999-2000 season when they reached the quarterfinals with current coach Simone Inzaghi a player on the team.

“Tomorrow the lads will probably realise what they have achieved,” said Inzaghi.

“We are back in the Champions League after 13 years, and it’s been 20 years since we’ve got into the second round.

“We are in the top 16 in Europe without ever having lost. It’s a deserved qualification that we have earned on the pitch.”

Lazio were the only unbeaten side in their group with four draws and two wins.

“The disappointment is not being able to celebrate with our fans because I can only imagine what the atmosphere would have been in the Stadio Olimpico tonight,” said former Italy striker Inzaghi.

Lazio needed to remain unbeaten to qualify against Club Brugge, who needed a win with the two teams having played out a 1-1 draw on Oct 28.

Despite just needing a draw, Inzaghi’s side were pushing for all three points to finish top of the group.

Sergej Milinkovic-Savic threatened early by getting his head to a Francesco Acerbi cross after just five minutes.

At the other end of the pitch, a fumble from Lazio keeper Pepe Reina saw the visitors pull level three minutes later, the Spaniard spilling a Noa Lang effort straight into the path of Vormer.

Immobile got Lazio’s second from the spot after 27 minutes, sending Mignolet the wrong way after Clinton Mata fouled the Lazio striker.

It was the 30-year-old’s fifth goal in four Champions League matches this season, having missed the game in Belgium and a 1-1 draw at Zenit, because of positive coronavirus tests.

“We are proud of our achievement, it’s too long since the club was at this stage,” said Immobile.

“The Champions League is a competition in which you need to give your everything; if not you don’t qualify.”

“We should have taken our chances earlier today, before the drama in the final minutes.”

Brugge were hampered after Sobol picked up a second yellow card for a foul on midfielder Manuel Lazzari.

Milinkovic-Savic sent wide after the break with Immobile missing a golden opportunity to kill off the game, shooting over the bar with quarter of an hour to go before being substituted for Felipe Caicedo.

Just after Vanaken pulled Brugge level as he nodded in a Vormer cross, setting up a tense final quarter of an hour as Lazio clung on for the crucial point.

Charles De Ketelaere came close to grabbing a late injury-time winner which would have put his side through, his shot rattling the crossbar.

“I feel great disappointment but I’m proud of my players who came so close to a historic win,” said Brugge coach Philippe Clement.