HomeNews‘I have never conditioned my husband to follow my opinions,’ Rosmah says...
News

‘I have never conditioned my husband to follow my opinions,’ Rosmah says of ‘Can I advise you something’ audio clip 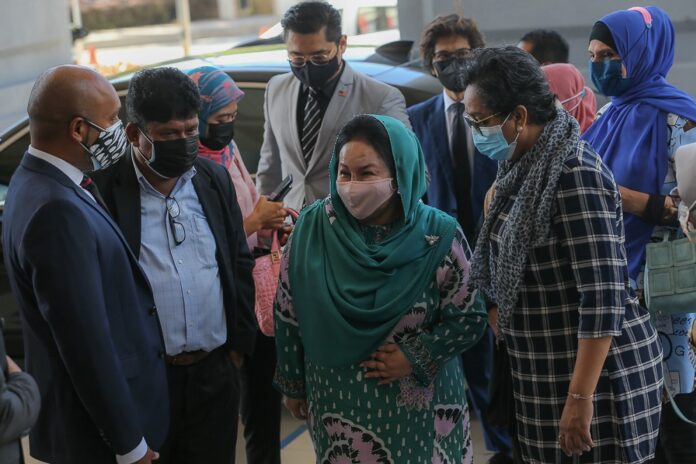 KUALA LUMPUR, Oct 6 — Datin Seri Rosmah Mansor today rebuked the prosecution’s characterisation of her as someone with an “overbearing nature” and the “ability to influence decisions in the public sector” through intervention by her husband, Datuk Seri Najib Razak, in his capacity as the prime minister, the High Court heard today.

Testifying in her own defence against charges related to the RM1.25 billion solar hybrid project in Sarawak, Rosmah testified that she and Najib often advise each other, just like any other married couple.

She stated the position taken by the prosecution, where it tendered a recording by the Malaysian Anti-Corruption Commision (MACC) dubbed the “Can I advise you something?” clips as an insight into her character, was a misrepresentation of her marital dynamics with Najib and irrelevant to the corruption charges laid against her.

“I would like to state here that myself and my husband, Datuk Seri Najib, are humans too, just like any other couple out there. My conversation with my husband is personal where I could give my opinion and my husband would listen and vice versa.

“When my husband gives his views, I then would be the listener. Whether my husband accepts my views is another matter. This is the facts of life when it comes to marital and family relationships.

“I have never conditioned my husband to follow my opinions, I was merely stressing my views and feelings. That is it.

“If this is used to paint me as having an overbearing nature and ability to influence decisions in the public sector, or that I am an overbearing person, as what is posited by the prosecution, then my marriage would not last for 34 years,” she said.

“This is a false allegation, unverified and should not be taken into consideration by this honourable court. Such a situation had never occurred,” she said.

Throughout her defence statement, Rosmah reiterated that the charges laid against her are malicious and selective in nature, while other perpetrators involved in the alleged corrupt acts were not prosecuted.

Last year, the prosecution had applied to admit the audio recording as evidence in this trial to show Rosmah’s character and her “overbearing” nature.

High Court Judge Mohamed Zaini Mazlan had then accepted the prosecution’s application to have the “Can I advise you something” audio clips and transcripts to be admitted as evidence, reversing his earlier ruling on the same matter that was reached on December 11, 2020.

In the opening statement of the trial, the prosecution had also posited that Rosmah also wields “considerable influence”, has the power to sway decisions in the public sector, and took active steps to help Jepak Holdings Sdn Bhd secure the RM1.25 billion solar hybrid project for rural schools in Sarawak.

In this trial, Rosmah is accused of soliciting RM187.5 million in bribes from Jepak Holdings Managing Director Saidi Abang Samsudin, of accepting a RM1.5 million bribe directly from him and a separate RM5 million bribe via her former aide, Datuk Rizal Mansor, in exchange for helping Jepak Holdings win a RM1.25 billion solar energy project from the Education Ministry.