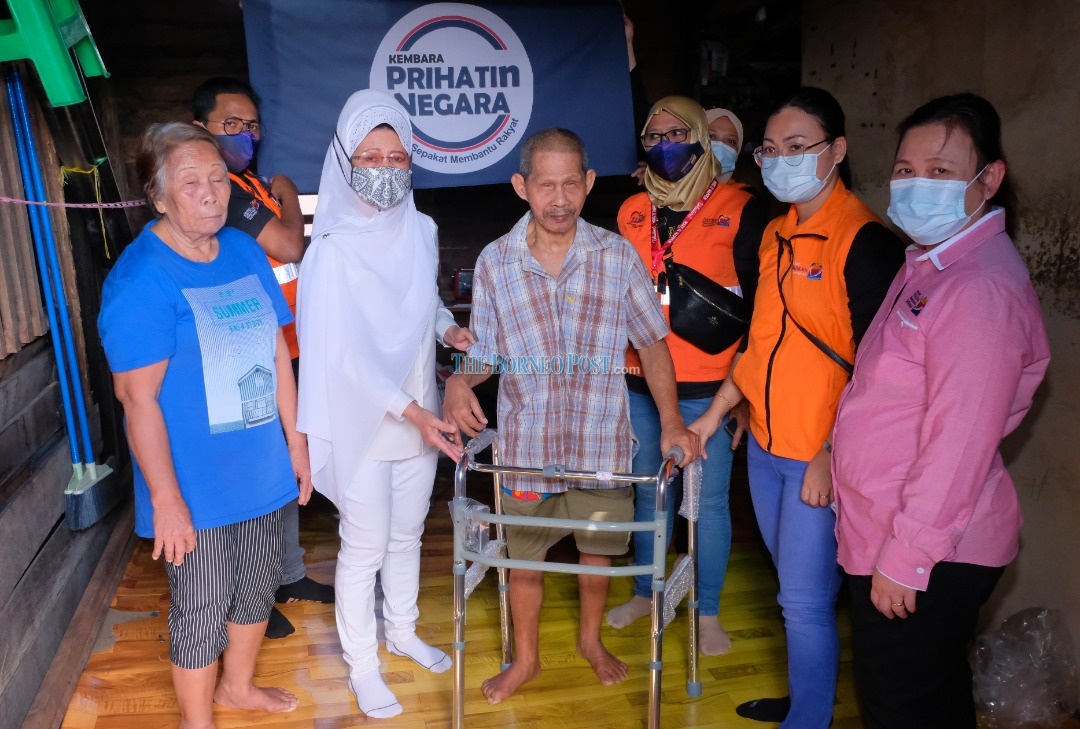 Fatimah (second left) presents a walking aid to one of JKM’s clients during the Kembara Prihatin Negara 2020 programme. – Photo by Muhammad Rais Sanusi

She pointed out that it was expected to increase as the poverty line income had been increased from RM1,500 to RM2,131.

“Besides that, with the Covid-19 pandemic going on, many people lost their jobs and sources of income. in such situation businesses are also affected and there are retrenchments.

“All these contribute to the increase of the poverty rate in the state but exactly how much the rate is, we would need to have a detailed study,” she said during the Kembara Prihatin Negara 2020 programme at Lorong Chawan 13 Saturday.

She was asked to comment on whether poverty rate in the state has decreased or increased.

Fatimah added that the state government has always emphasised on evidence-based data.

“From there (the study), we will be able to come up with accurate plans and policies based on actual data. This will help us to find ways to close the poverty gap,” she said.

While visiting squatters in the Lorong Chawan 13 area, the minister said that she will suggest to Social Welfare Department (JKM) to organise a one-day activity to look into the needs and issues of the occupants there, besides providing them with food aid.

She informed that she first knew of the squatters from a blind masseur whose income is affected during this pandemic time and who is getting monthly assistance from JKM.

“The activity will involve multiple agencies including National Registration Department, Health Department, Land and Survey Department, and the local council. It will be an inter-agency effort in order to provide various services to the occupants of the squatters.

“We are also looking at a long-term solution, which would be relocation to proper housing where they only pay minimal and affordable fee each month,” she said.

Fatimah noted that among some of the issues suffered by the 51 occupants of the squatters include children without documentations.

“This could be due to parents not registering their births and also due to improper marriages involving foreign women, where the children will follow the nationality of their mother.

“This is the most complicated (issue) and takes time to solve. The children become the victims as they do not have access to facilities enjoyed by Malaysian children including affordable education and healthcare,” she said.

On a separate note, Fatimah said that the ministry was well-prepared to face the monsoon flood season.

“Forward bases have also been identified and are stocked up with dry food items like rice, cooking oil, coffee, tea, sugar, canned food and so on. The numbers have been counted so that they can be supplied to areas that are not evacuated,” she said.

She said that manpower in terms of staff and volunteers are also ready.

“The first aid to be dispatched when JKM gets the information is to deliver dry food or catered food to the victims.

“The only difference this time is that, due to the pandemic, there will be no cooking on-site at evacuation centres,” she added.