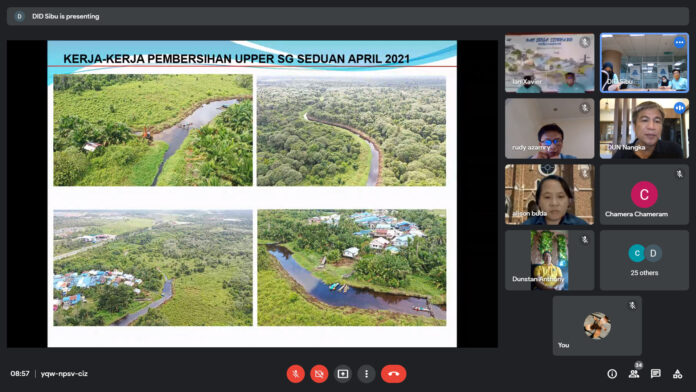 A presentation of Sungai Seduan cleaning works during the launching of Sibu-level World Rivers Day.

SIBU (Sept 27): With its beautiful surroundings, Sungai Seduan could be developed into a tourist attraction like River Thames in Cambridge, says Assistant Minister of Local Government and Housing Dr Annuar Rapaee.

He suggested the relevant authorities deliberate on tapping Sungai Seduan as a tourism potential.

“River Thames in Cambridge is a small waterway that is well-kept with many attractions for visitors to the area.

“Similarly, if Sungai Seduan is well maintained and turned into a tourist attraction, it can generate income for longhouse residents along the waterway.

“I know that longhouses in Nangka state constituency are located by the river like Rumah Sebastian Ngalang, Rumah Jemat and Rumah Bungkong,” he said during the launching of the Sibu-level World Rivers Day, held virtually yesterday.

The Nangka assemblyman said that request for an allocation from the government for the purpose can be made, and suggested that longhouse folk provide boat services for visitors to paddle along Sungai Seduan like in Cambridge.

Earlier, he said everybody must play their part to protect the state’s rivers.

“About 40 to 45 years ago I could see ‘seluang’ and ‘buris’ fishes in the Igan River but that has changed today due to changes in water quality and fish population.

“This clearly shows that we have failed to protect our rivers and we need to restore its condition. It would not be easy to restore the environment and would not happen in the next five to 10 years because there are factors involved and a lot of research is needed.

“Rivers are not our dumping ground but a source of livelihood where we get clean water and fish,” he stated and cited the recurrence of logjam in the Baleh and Rajang rivers last month which had affected water supply in Sibu.

He said Sibu DID has just received RM80,000 allocation under the federal river maintenance programme for river cleaning projects.

The amount was greatly reduced compared to RM800,000 received last year, he said.

“Many river-cleaning projects could not be carried out this year and had to be postponed due to the reduction in allocation.

“Rumah Sebastian Ngalang is one of the longhouses located at the upper part of Sungai Seduan where some residents were still depending on the river to get to their farm and for fishing despite being connected by road to Sibu town and other places.

“However floating plants such as water hyacinths and grass can clog the waterway and this can cause difficulties and pose danger to boats,” he said.

Sibu DID has carried out cleaning works along 3,300 metres of Sungai Seduan, from the Jalan Tun Ahmad Zaidi Adruce bridge up to Rumah Sebastian Ngalang, in April this year.

Another 4,324 metres of the river will be cleared once the department received the allocation from the federal government.