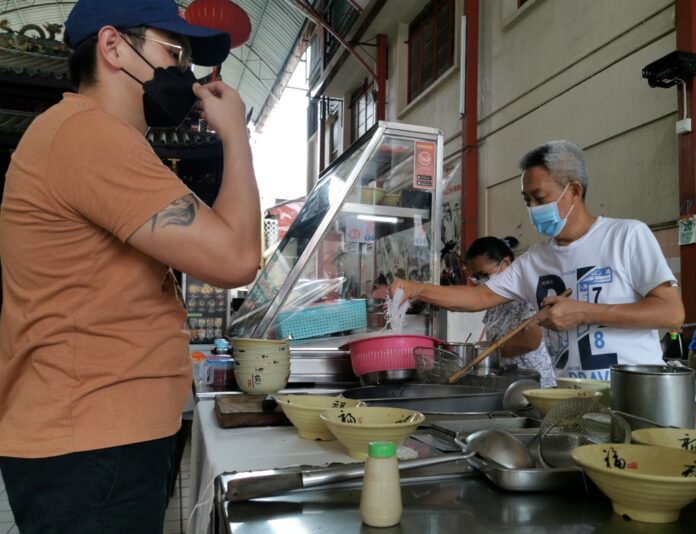 KUCHING (Sept 21): Diners did not exactly throng eateries around the city area yesterday, which reopened for dine-in yesterday.

Met by The Borneo Post yesterday, some of the food operators believed that this could be attributed to Kuchingites still having the fear of being infected with Covid-19, while eating out.

Lim says the food business, even with the lifting of the rule, is ‘still slow’.

“Perhaps, the customers are still afraid to dine in at eateries. I hope they would have the confidence to do it very soon, because business operators like me need dine-in customers to improve our income,” he said.

Lim believed that with more and more Kuchingites having received full vaccination, it would reduce the risk of infections and thus, assure the public that it would be fine to dine in at eateries.

For Andrew Goh, 66, who operates a stall inside a food court at Carpenter Street, the bulk of sales for operators like him is generated by the dine-in customers.

“My income have plummeted since Covid-19 hit the country, because my customers have not been able to do dine-in.

“So the announcement about them being allowed to dine in is good news, and more of my regular customers would come back,” he said.

Law hopes that the no dine-in rule would never be enforced in Sarawak again.

Alice Law, 63, who manages a noodle stall in ON3 Kopitiam at Jalan Song here, expressed the same sentiment.

“I hope that the no dine-in rule would never be enforced in Sarawak again, although I understand the importance of its implemented. This no dine-in rule has badly affected my income,” she said.

Cityfolk met by The Borneo Post yesterday generally welcomed the lifting of the no dine-in rule over the Southern Zone of Sarawak, but were still cautious about it.

Palima Ngadan, 34, said he could not wait to have his favourite porridge at his favourite coffeeshop but at the same time, he was still worried about getting Covid-19 infection.

“For now, I think everyone needs to be careful. I just hope that everyone who do dine-ins would always adhere strictly to the SOP (standard operating procedures) set to curb the spread of Covid-19” said this resident of Kampung Tabuan Dayak.

Meanwhile, Sebastian Kaboi said he would be very cautious in choosing the eatery where he would have his meal at, pointing out ‘not crowded’ as amongst the key criteria.

“We’d never know if the person eating next to us had been infected with Covid-19.

“I would only dine in if I really had to; otherwise, I would prefer to get my order packed to go – for now, at least,” said the 28-year-old from Serian.

For Cassidy Biol, 28, he was beyond happy that the government had lifted the no dine-in rule.

“I prefer eating at the restaurant because the dishes that I like are best served ‘fresh from the kitchen’.

“The food that I like does not taste good when packed for takeaways. Now that the rule has been lifted, I now get to enjoy my favourite restaurant dishes again,” said Cassidy.

The no dine-in rule for Sarawak’s Southern Zone commenced on Aug 22 this year, and was lifted yesterday – subject to a strict set of SOP revised by the State Disaster Management Committee (SDMC).

Amongst the requirements are for the operators, their employees and customers to have received two complete doses of the Covid-19 vaccine, and also for the ventilation at the food premises to be in compliance with the standards issued by the Ministry of Local Government and Housing.