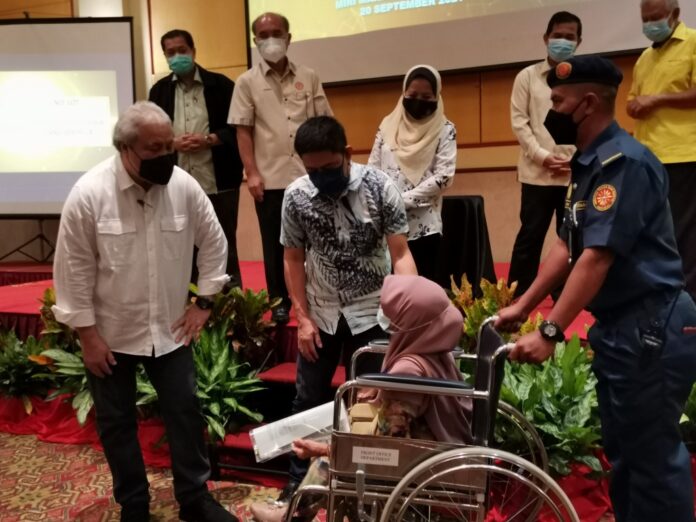 Ripin (second left) presents a land title to a wheelchair-bound landowner from Kampung Beraya, witnessed by Awang Tengah (left), Rosey (back row, centre) and others.

“There was huge difference in output and 776,226 ha (1.9 million acres) have already been gazetted under this new initiative under which communal land title under Section 6 and individual land titles for perpetuity under Section 18 of the Land Code are issued,” he disclosed.

Awang Tengah, who is Second Minister of Urban Development and Natural Resources, said this when officiating the presentation of 41 out of 270 individual perpetuity land titles for the Beraya region in Miri yesterday.

Among those who attended the ceremony were Lambir assemblyman Ripin Lamat and Bekenu assemblywoman Datuk Rosey Yunus.

He said this big increase in the acreage of land surveyed underscored the commitment of the Gabungan Parti Sarawak (GPS) state government to accord recognition to native land owners who had proven their ownership under the law.

He assured that for as long as GPS remains in power, the state government will continue this drive to accord legal recognition of native land as it has invested in more manpower and funds that enable native land to be issued with perpetuity title free of charge.

The deputy chief minister said these surveys requiring the spirit of cooperation and accommodation among land owners cannot proceed if there is dispute among communities and individuals or if court litigation is involved.

“The Land and Survey Department has received overwhelming applications for land to be surveyed, and I have instructed it to relocate surveys to other areas if a certain area has unresolved land disputes or court case as others are waiting for their turn to have their land surveyed,” he said.

He urged community, village or longhouse chiefs to help resolve any disagreements to enable survey teams to proceed unhindered and expedite surveys requested for issuance of communal land or individual titles.

Awang Tengah commended the Kampung Beraya land owners for their good spirit in the settlement operation in 2017 which enabled the department to survey 1,677.6 ha of land and issue 717 individual titles under Section 18 of the Land Code.

A total of 270 titles for 227.3 ha of land were presented to 183 owners in a symbolic ceremony yesterday.

Earlier on, Miri Division Land and Survey Department superintendent Anthony Aboi in his speech said though they faced multiple challenges including constraints due to Covid-19 pandemic, his department strove to issue titles to provide recognition and security to land owners.

He said rejection due to border dispute caused by overlapping claims among the community or family members, instigation by outsiders, unreasonable claims, absence of family members or neighbouring land owners for border determination, are among the challenges faced by survey teams throughout the state.