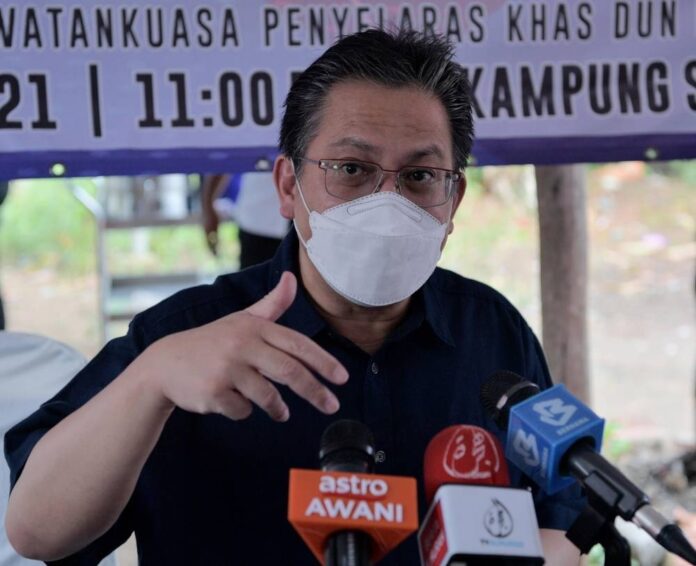 Nur Jazlan claimed the problem with Bersatu and PAS stems from having a relationship without sincerity. — Bernama pic

JOHOR BARU, Sept 28 — Johor Umno deputy chairman Datuk Nur Jazlan Mohamed today questioned the existence of the Perikatan Nasional (PN) coalition when its two main parties Bersatu and PAS kept bumping heads over who they each see as the “enemy”.

He claimed their current coalition is confusing voters and has no direction.

“Despite being in a partnership, both parties seem to be at odds with each other. How will they work together in PN?” he posted on his Facebook account.

He was commenting on the finger pointing being played out in the media after Bersatu president Tan Sri Muhyiddin Yassin said PN must treat the Umno-led Barisan Nasional (BN) coalition as the “main enemy” in the coming 15th general election.

Bersatu, PAS and Umno have formed an uneasy government at the federal and several state level.

Nur Jazlan claimed the problem with Bersatu and PAS stems from having a relationship without sincerity.

He said such an outcome was expected when one works together with treacherous political parties that are never honest, full of deception, and have their own agendas.

“That is why from the very beginning Umno refused to cooperate with PN, especially with Bersatu, where many of its leaders were party traitors.

“These were ex-Umno leaders who jumped to Bersatu for their own benefit, starting from the party president up to the other leaders,” he said.

Nur Jazlan, who was a former parliamentarian and deputy minister before the 2018 national polls, alleged that PAS has been increasingly desperate to hold on to power.

He alleged that the Islamist party was not satisfied being a main partner in PN and still wanted the cooperation of Umno and Muafakat Nasional (MN).

“From the PAS Mursyidul Am, to the party’s president, its vice president and also its secretary-general, they are all trying their best to inspire the MN cooperation among grassroots members.

“At the same time, PAS still maintains its ‘loving’ relationship with Bersatu,” he said.

Nur Jazlan pointed out that even PAS ulama council secretary Datuk Nik Muhammad Zawawi Salleh admitted there was animosity between Umno and Bersatu, that was likened to disagreements involving two women married to the same husband.

“That is why to this day, PAS is still begging to be with Umno even after getting a triple talaq divorce in MN,” he said.