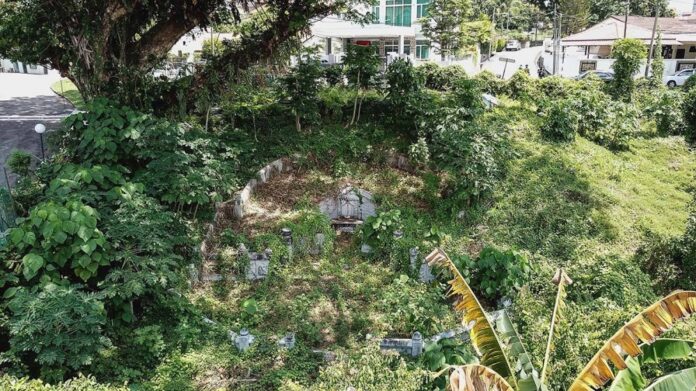 Rosli said the agency had taken photographs of the tomb before demolition for documentation but added that the details were unclear as the original burial site had been overgrown and covered with weeds. — Picture by Sayuti Zainudin

GEORGE TOWN, Sept 28 — Penang Heritage Commissioner Rosli Nor today promised to salvage what it can of a priceless 138-year-old tomb that was illegally demolished and dumped in the Jelutong landfill last month.

He said the agency has managed to identify pieces of the intricately carved stonemasonry from Foo Teng Nyong’s tomb from the landfill and hopes to display them at the state museum on Macalister Road.

However, he added that full reconstruction may not be possible.

“It would be difficult to reconstruct the tomb to its original condition as our photographic documentation was not clear enough,” he told reporters here.

He said the agency had taken photographs of the tomb before demolition for documentation but added that the details were unclear as the original burial site had been overgrown and covered with weeds.

Rosli also admitted that the state has no intention to gazette Foo’s tomb as a heritage site but wanted to at least document it in detail.

“They were not supposed to be given a permit to demolish the tomb without strict conditions of letting the authorities document it in detail first so I am so angry that this happened,” he said.

He added that in Melaka, any permit for removal of tombs of note are only approved with the condition that it can only be done after the authorities have completed documenting it for record.

According to Rosli, the land owner had deliberately chosen to exhume Foo’s remains and demolish the original tomb on a Sunday to avoid being stopped by the authorities.

“The developer can’t use the land anyway so I don’t see why the rush to remove it,” he said.

He explained that Foo’s tomb had been located adjacent to a road and in a space that was deemed a setback.

In architectural terms, a setback is a required vacant space between a building and the road.

Foo and Keng Kwee’s great grandson, Jeffery Seow had asked the state authorities to preserve the tomb after the land owner published a notice of exhumation on February 16.

Seow had also contacted Rosli who later initiated discussions with the land owner on preserving the tomb for its unique features.

However, the landowner demolished the tomb on August 28, buried Foo’s remains in an unmarked grave in Batu Gantung and dumped pieces of the tombstone at the Jelutong landfill.

This led to an uproar among heritage advocates and Seow had also demanded that the tomb be reconstructed on its original site.

The Penang Island City Council has since issued a stop work order and notice to the land owner to show cause for demolishing the tomb without informing the city council as required by the tomb demolition permit.

It was later reported that the city council will be taking legal action against the land owner for failing to meet with the conditions of the demolition permit.

However, the land where Foo’s gravesite is located is now no longer under the Chung family and the current land owner is planning to develop the land.

He was dubbed as the founder and administrator of modern Taiping and was appointed as Kapitan China by the British in 1877.

His and Foo’s son, Chung Thye Phin, served in the Perak State Council till 1927 and was also known as the last Kapitan Cina of Perak.

Foo died in 1884 so the grave is essentially older than Hye Kee Chan, now known as Pinang Peranakan Mansion, at 29, Church Street which is protected within the Unesco World heritage site.

Facebook
Twitter
Pinterest
WhatsApp
Previous articleWhatsApp announces Call Links to make conference calls easier, but will it be safe and secure to use?
Next articleWhy stay together if can’t agree on enemy? Umno’s Nur Jazlan asks Bersatu, PAS
Opalyn Mok