One of Sabah’s oldest papers to shut this month 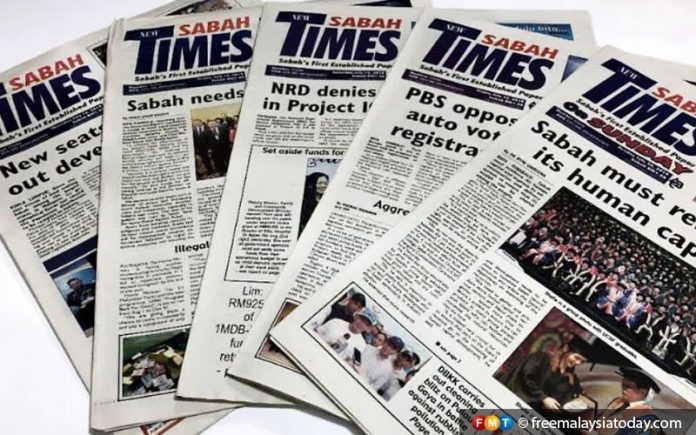 KOTA KINABALU: Sabah will lose one of its oldest newspapers with the New Sabah Times set to bring the curtains down at the end of this month.

The paper, which was founded in 1949 but underwent several rebrandings since, will close after 70 years.

Its managing director Felix Gusti told FMT that a sharp drop in circulation and falling advertisement revenues were among the reasons behind the imminent closure.

“We still have some newsprint and we have to finish that by Dec 31. After that, it will be closed for good, that much I can tell you,” Gusti said.

“I think our competitors, the Borneo Post and Daily Express, are also experiencing the same problems. Although they may have other reasons to continue but we have been operating at a very big deficit every month.

Gusti pointed out the cost to operate was too high even if the paper were to print a smaller number of newspapers.

“In the first place, our circulation has dropped so much. When it drops, that means advertisements also drop. Nobody wants to advertise when the circulation is small,” he said, adding he will be issuing a proper statement after a staff meeting this Thursday.

Gusti is scheduled to speak to some 90 staff from the editorial and non-editorial sections over the course of the day, with outstation workers notified through video conferencing.

He is expected to discuss with the staff the severance procedures, among others.

A staff member, who declined to be named, claimed the management was still divided on whether to go ahead with the closure.

“We heard the management is still 50-50 about the closure. Half of them want it to close but the others still harbour hopes of the paper continuing, or at least keeping the name,” said the source.

The employee also said some are hoping that, instead of the closure, the paper would take a new direction such as having only an online version.

Besides the New Sabah Times, the Daily Express and the Borneo Post are the only two established local-based English dailies still available in the state.

The New Sabah Times also has Malay and Kadazan Dusun sections, which are quite popular among its readers.

Following the fall of the Barisan Nasional (BN) government in the 2018 general election, there was speculation that the paper, which is closely linked to the political outfit, could be closed due to a sharp drop in funding.

It was renamed to North Borneo News & Sabah Times as well as Kinabalu Sabah Times before reverting back to Sabah Times. Sabah Times stopped printing in 1995 but was revived three years later as the New Sabah Times.