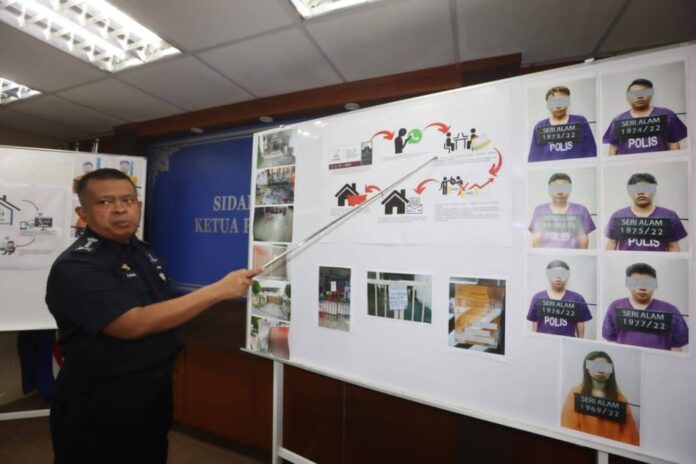 JOHOR BARU, Sept 29 — Police busted a Johor-based scam syndicate that was actively developing applications aimed at accessing user data before cheating their victims of money, with the arrest of six individuals.

It is understood that the suspects, consisting of two men and four women, were well-versed in information and communications technology (ICT).

“The suspects were later identified as the syndicate’s senior leader, who is also a company owner, three software developers and two multimedia designers, aged between 21 and 39.

“The suspects were arrested in the joint operation dubbed Ops Merpati within the Taman Bukit Indah residential area near Johor Baru at 3.30pm yesterday.

“The arrests were also recorded as the first case of its kind in Johor and the second in Malaysia,” said Kamarul Zaman during a press conference at the Johor police contingent headquarters here today.

Kamarul Zaman explained that the syndicate’s modus operandi was to advertise the sale of goods at low prices on social media to attract their victims.

He said the potential victims who then contacted the syndicate’s members via mobile phone would be sent a phony link for payment.

“Once the victims started to initiate payment through the given link, they would be misled by the application developed by the syndicate.

“The application would then open a pathway that allowed the syndicate’s members to start hacking the victim’s data and later access their bank accounts to transfer cash without the victim’s knowledge,” said the state’s top cop.

Kamarul Zaman said further probes by investigators revealed that the syndicate had sold more than 100 of such applications to interested parties.

He said the applications were valued at upwards of RM30,000 each.

“Investigations of the case are still ongoing and police will continue to track down other syndicate members that use the same tactics.

“We believe that more than 100 of the scam applications have been sold by this syndicate,” he said.

The case is being investigated under Section 420 of the Penal Code for cheating and Section 120 of the same Code for criminal conspiracy.