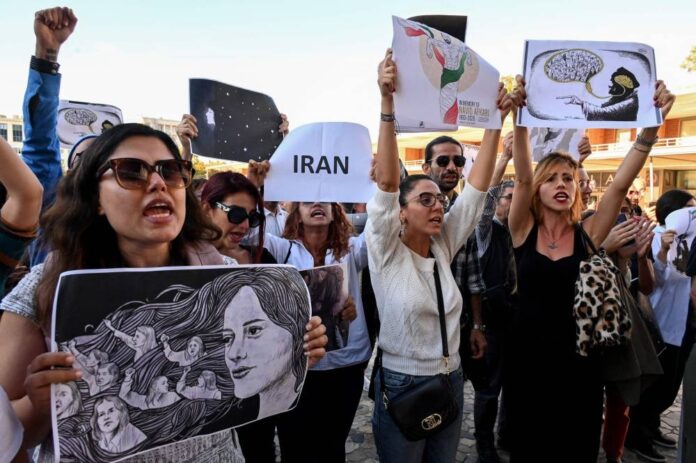 Women protest with placards during the unveiling of a banner on the facade of the town hall in support of the Iranians fighting for their freedom and against obscurantism in their country, in Montpellier, southern France October 3, 2022. — AFP pic

PARIS, Oct 5 — The European Union said yesterday it was weighing tough new sanctions on Iran over a lethal crackdown on protests sparked by the “killing” of Mahsa Amini, after a similar move by the United States.

Anger flared at her funeral and spread to become the biggest wave of protests to rock Iran in almost three years. A crackdown has seen scores of demonstrators killed and hundreds arrested.

EU foreign policy chief Josep Borrell said the bloc was considering “all the options at our disposal, including restrictive measures, to address the killing of Mahsa Amini and the way Iranian security forces have been responding to the demonstrations”.

It came after President Joe Biden said the United States would impose “further costs” this week on “perpetrators of violence against peaceful protesters” in Iran.

Rights groups voiced deep concern after Iranian riot police used tear gas and paintball guns against hundreds of students at Tehran’s Sharif University of Technology on Sunday night, with video footage showing detainees being taken away with fabric hoods over their heads.

“Women, Life, Freedom,” the young female protesters chanted as they marched down the central strip of a busy highway in Marivan, in footage that AFP has not independently verified.

In his first public comments on Amini’s death, supreme leader Ayatollah Ali Khamenei had on Monday accused Iran’s arch foes the United States and Israel of fomenting the protests.

The riots “were engineered by America and the occupying, false Zionist regime, as well as their paid agents, with the help of some traitorous Iranians abroad”, Khamenei said.

The unrest has overshadowed diplomatic efforts to revive a 2015 nuclear deal between Iran and major powers which had come close to a breakthrough in recent months before stalling again.

But the White House said the “problems with Iran’s behaviour” are separate from efforts to revive the nuclear deal, which it would pursue as long as it is in US national security interests.

Borrell’s announcement that the EU was considering sanctions came after France said it was pushing the bloc to “target senior officials” with punitive measures, including “freezing their assets and their right to travel”.

Iran has repeatedly accused outside forces of stoking the protests and last week said nine foreign nationals — including from France, Germany, Italy, the Netherlands and Poland — had been arrested.

Yesterday, an official said singer Shervin Hajipour had been released on bail. He was arrested after his song Baraye (For), with lyrics taken from social media posts about the reasons people were protesting, went viral.

BBC Persian and Iran Wire reported meanwhile that authorities had taken possession of the body of a teenager killed in the unrest and secretly buried her on Monday to avoid a funeral that could spark more protests.

Nika Shahkarami went missing on September 20 after heading out to join a protest in Tehran, and her family had been due to bury her in the western city of Khorramabad on what would have been her 17th birthday, her aunt Atash Shahkarami wrote on social media.

At least 92 protesters have been killed so far in the unrest, said Oslo-based group Iran Human Rights (IHR), which has been working to assess the death toll despite internet outages and blocks on WhatsApp, Instagram and other online services.

Amnesty International has confirmed 53 deaths, while Iran’s Fars news agency put the death toll at “around 60” last week. At least 12 members of the security forces have been reported killed since September 16.

Another 63 people were killed last week when security forces “bloodily suppressed” a protest in Zahedan, near Iran’s southeastern border with Pakistan, said IHR, raising its toll from 41.

The clashes erupted after Friday prayers during protests sparked by accusations a police chief in the region had raped a teenage girl of the Baluch Sunni minority, the rights group said. — AFP