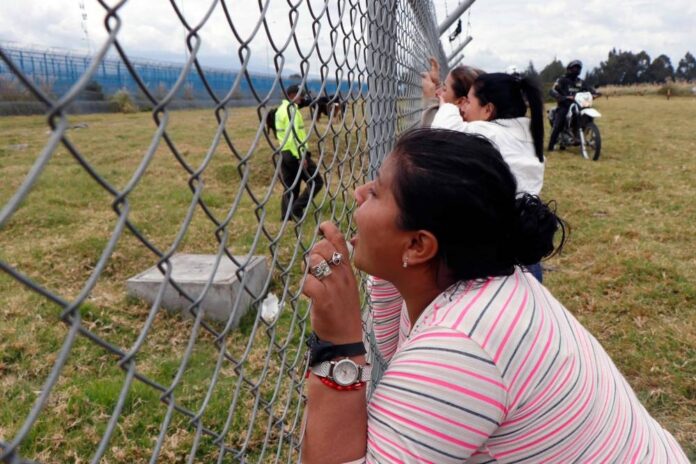 LATACUNGA, Oct 5 — New clashes were reported yesterday in an Ecuadoran prison where 15 people died in a riot the day before, the state prison administration authority said.

Violence in Ecuador’s prisons, where drug gangs vie for power, is often carried out with knives and sometimes involves beheadings. The unrest has left more than 400 prisoners dead since February 2021.

“There has been a new incident” in the Latacunga prison in the centre of Ecuador, around 60 miles (100 kilometres) southeast of Quito, the SNAI prison authority told reporters.

The prison authority had to send in tactical units to re-establish control following Monday’s riot that left at least 15 inmates dead and 33 injured.

SNAI said the most recent clashes took place in a medium-security part of the prison that houses 4,300 inmates and is one of the largest in the country.

The authority said “detonations” had been heard but that police were “containing” the inmates. No deaths have been reported.

Administrative personnel were evacuated from the prison, said SNAI.

Following Monday’s massacre, worried relatives waited outside the prison yesterday hoping for information on their loved ones.

“I’m looking for my brother Carlos Bravo. I got here at 6:00 am,” one tearful woman who did not give her name told AFP.

“They told me to come and fetch my brother. I don’t know anything, there’s no list (of the dead), no-one has told me anything.”

A force of 600 police and military personnel entered the prison on Monday to try to retake control from the rioters, authorities said.

Relatives of inmates stand outside the Regional Sierra Centro Norte Cotopaxi prison as they wait for news of their loved ones after fresh clashes between prisoners were reported, in Latacunga, Ecuador October 4, 2022. — AFP pic

Monday’s riot was allegedly provoked by the murder of Leandro Norero, a 36-year-old suspected drug trafficker known by the alias “El Patron” (the boss).

Norero, who had become one of the leaders of a group of inmates, was arrested last May for allegations of money laundering, in an operation in which US$6.4 million, 24 gold bars, firearms and ammunition were allegedly seized.

“From what we can tell, Leandro Norero would be among the victims,” said SNAI assistant director Jorge Flores.

The prosecutor’s office said on Twitter it was working to identify the dead.

Website GK said Monday’s riot broke out after an attack “against Norero and his security, at least six prisoners,” quoting unnamed inmates.

Norero, who was also wanted by Peru, was allegedly a member of the Los Chone Killers gang.

Other gangs such as Los Choneros, Los Lobos and Los Tiguerones also have a major presence in Ecuador’s prison system, from where gang leaders manage the drug trafficking trade.

Norero’s murder could spark further clashes, the interior ministry saying said, adding “we have to be careful.”

The country’s overcrowded prisons contain about 35,000 inmates, many of them members of gangs linked to drug trafficking.

A government committee noted in April that Ecuadorian prisons “are considered warehouses of human beings and torture centres.”

Bordered by Colombia and Peru, the world’s largest cocaine producers, Ecuador serves as a departure port for drug shipments, primarily to the United States and Europe.

In a bid to improve the living conditions in Ecuador’s prisons, President Guillermo Lasso launched an inmate census in August.

During a television interview on Monday, he offered “a message of condolence and solidarity with the families of those who died today in (the prison)”. — AFP