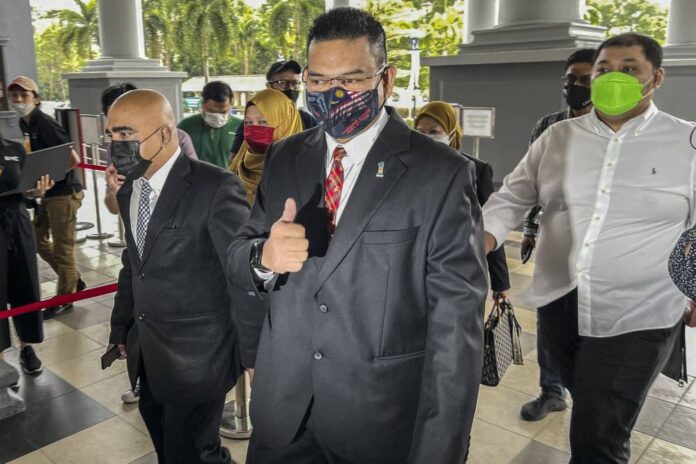 PUTRAJAYA, Sept 29 — A one-month jail imposed by the High Court on Datuk Lokman Noor Adam for contempt of court is insufficient and should be increased to protect the dignity of the administration of justice, the Court of Appeal heard today.

Deputy public prosecutor Datuk Dusuki Mokhtar submitted that the prosecution is seeking at least a three-month imprisonment for the former Umno Supreme Council member to show the seriousness of the offence as this is a public interest case.

“First and foremost, this is a public interest case. Interference with the administration of justice is of serious nature. We humbly submit that the sentence imposed by the High Court is insufficient.

“Those who behave this way are expected to be punished and receive a sentence that is designed to deter others from similar conduct,” he said in the prosecution’s cross-appeal against the High Court’s decision which sentenced Lokman to only a month’s jail.

Dusuki said in a police report, the contemnor (Lokman) made further allegation that it was Amhari Efendi who misled the accused (Najib) and was in cahoots with fugitive businessman Low Taek Jho or Jho Low to victimise Najib.

“The contemnor further quoted some of the evidence presented in court and manipulated it in the police report to paint the picture that Najib was victimised by Amhari Efendi. These acts constitute intimidation on the aforesaid witness and further witnesses for the prosecution,” he added.

Meanwhile, Lokman’s counsel Tan Sri Muhammad Shafee Abdullah submitted that his client was only practising his public duty when he lodged a police report against Amhari Efendi.

“A police report lodged by my client against the witness cannot be subject to contempt. My client lodged the report after the witness (Amhari Efendi) admitted that he received monies from fugitive businessman Low Taek Jho or Jho Low. How can this be intimidation?” the lawyer said in Lokman’s appeal against his conviction and sentence.

On January 14, 2020, Justice Sequerah rejected Lokman’s application to set aside the leave obtained by the AG. Lokman also lost his two appeals in the Court of Appeal and the Federal Court to overturn the High Court’s ruling.

Thomas had initiated the committal proceeding against Lokman to seek an order for Lokman to be committed to prison or be fined for his action.

According to Thomas, on September 25, 2019, Lokman uttered words in a video interview that constituted an express or implied threat against Amhari Efendi for having given evidence in the former prime minister’s trial at the High Court.

Thomas said that on the same day, Lokman lodged a police report against Amhari Efendi in respect of the evidence given by him at the trial.

The objective or purpose of the respondent’s act was to harass and intimidate Amhari Efendi, other witnesses and any potential witnesses who may come forward to give evidence against Najib in the 1MDB trial, said Thomas. — Bernama