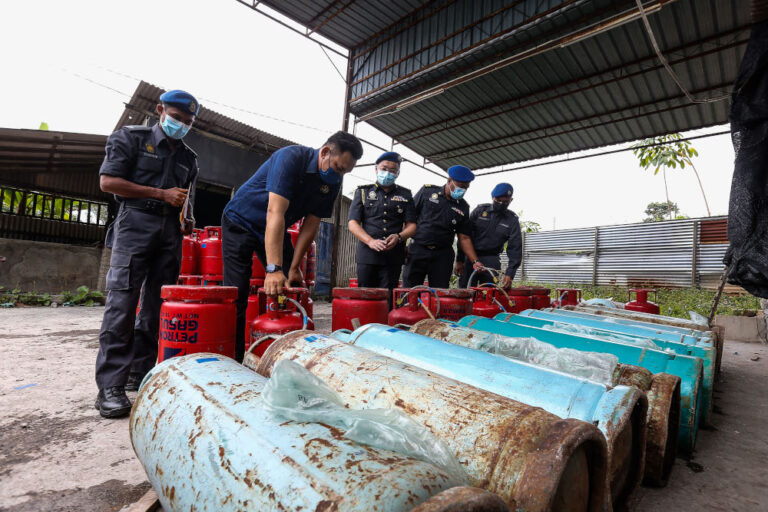 KPDNHEP Penang Director Mohd Ridzuan Ab Ghapar said an enforcement team of six officers first raided a gated lot in Mukim 14 in Southern Seberang Perai at about 1.25pm yesterday and found 47 boxes of subsidised cooking oil inside a lorry within the premises.

He said there were another seven boxes of cooking oil stored in a shed within the lot and they had found a number of opened 1kg cooking oil packets along with a plastic drum filled with what is believed to be cooking oil and two more plastic tanks filled with cooking oil on another lorry.

“There was an electric pump and plastic pipe connecting the plastic drum to the plastic tanks on the lorry and all of the items found at the site costs an estimated RM26,700,” he said during a press conference in Nibong Tebal today.

Mohd Ridzuan said the lot was registered under a company that does not have any licence or permit to store, process or sell cooking oil that is listed as a controlled item under the Control of Supplies Act 1961.

“The company is believed to have misappropriated the subsidised cooking oil by transferring it into new packaging and possibly selling it as industrial cooking oil at a higher price,” he said.

He said about 1.3 tonnes of cooking oil were seized from the location and two Malaysians were caught red-handed processing the oil at the site.

In addition to that, early this morning, a team of eight KPDNHEP officers raided an unnumbered store at Jalan Kg Telok in Nibong Tebal and seized 1.7 tonnes of subsidised LPG that was being misappropriated to be resold as industrial LPG.

“The raid at 5am this morning was a result of two months of investigations as we wanted to catch them in action,” Mohd Ridzuan said.

A 29-year-old Malaysian was caught transferring the contents of 20 LPG cylinders to 20 industrial LPG cylinders during the raid this morning, he added.

Upon further investigations, he said another 17 full LPG cylinders and 16 emptied cylinders were found in the premises.

“We also found 24 pipes and a lorry used to transport the LPG so the total items seized amounted to about RM21,000,” he said.

Mohd Ridzuan said the misappropriation of subsidised or controlled items that were then sold at a higher price is a serious matter as these items were heavily subsidised and are meant for the general public.

He said both cases will be investigated under the Control of Supplies Act 1961 which carries a fine of up to RM1 million or a jail term of not more than three years or both.