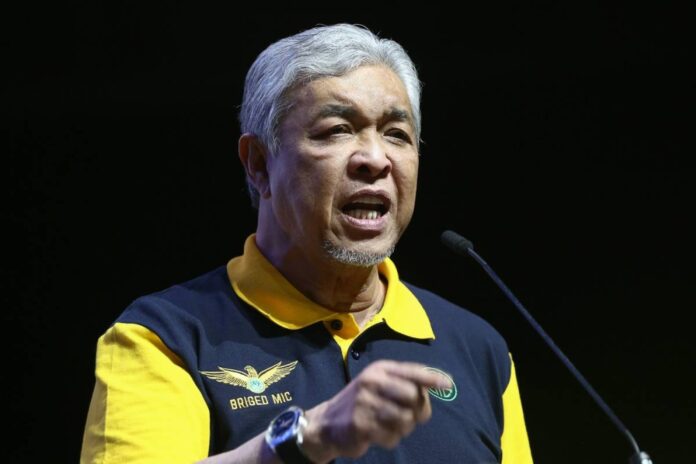 Zahid said the Opposition’s flood narrative was similar to the tactic it used in past state elections during the Covid-19 pandemic. — Picture by Yusof Mat Isa

Zahid, who is currently facing several court cases, claimed the Opposition is attempting to buy time by delaying the election in the belief that its reputation can be restored and its popularity increased over time.

“When the Opposition does not have this advantage, efforts to delay the general election continue. So, let’s not be fooled by such Opposition tactics that are still trying to build weak myths and narratives,” he added.

Under fire for lobbying for the GE15 to be held during the year-end monsoon season that had in previous years claimed lives and damaged properties, Zahid said BN has an advantage since the caretaker prime minister from the ruling coalition is still able to hold official meetings, including chairing the National Disaster Management meeting that handles floods.

“In terms of control over floods during the monsoon season, Prime Minister Datuk Seri Ismail Sabri Yaakob still has the power in his caretaker and interim government capacity if Parliament is dissolved to pave the way for GE15 by this year,” he said.

Zahid said in such a situation, it is difficult for the Opposition to highlight its role during the monsoon season.

“They will not be able to compete on a level playing field with BN being the interim ruling party after Parliament dissolves,” he said.

The Bagan Datuk MP said the Opposition’s flood narrative was similar to the tactic it used in past state elections during the Covid-19 pandemic.

“As a result, the Opposition itself was punished by voters after they used the issue as a campaign to reject the Melaka, Johor and Sarawak state elections. The Opposition will face a repeat of this defeat for GE15,” said Ahmad Zahid.

Umno’s Health Minister Khairy Jamaluddin had on September 22 said that his ministry advised against a general election during the monsoon season due to flood risks.

A former Election Commission (EC) chairman also predicted that Malaysian taxpayers could have to pay up to an additional RM1 billion for the country’s 15th general election if the ruling coalition forces one in November or the heart of the yearly monsoonal floods.