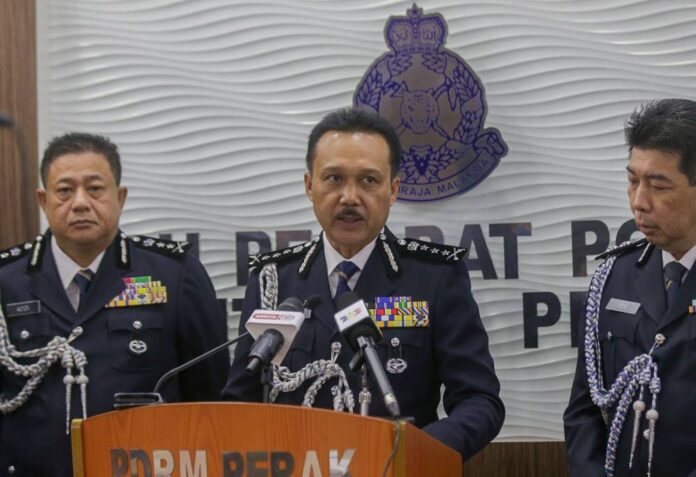 IPOH, Sept 30 — Police confiscated various types of drugs worth over RM350,000 and arrested a total of 410 addicts and dealers via the three-day Ops Tapis conducted from September 26 to 28 around Perak.

“We have conducted raids on 21 places and arrested 408 individuals who were involved in various drugs offences,” he told a press conference at the Perak Police Headquarters here.

Mohd Yusri said that out of the 408 offenders, aged between 16 and 63, 390 were men and 18 were women, including three foreigners from Myanmar, Vietnam and Thailand.

“A total of 165 individuals were arrested for possessing drugs, 34 arrested for distributing drugs while 188 were investigated under Section 15 (1) (a) of the Dangerous Drug Act 1952,” he said.

He also said that seven individuals were arrested under the Special Preventive Measures Act 1985 to prevent drug distribution, while 14 others were listed as wanted persons for various drug offences.

“We have identified 10 serious drug addicts who will have action taken against them under the Section 39C of the Dangerous Drug Act 1952, which carries a jail sentence between five to seven years and whipping not more than three times,” he said.

“The worth of the drugs seized was RM194,091. We have also confiscated two cars, four motorcycles and cash amounting to RM64,018 in the raid,” he said.

In the same operation, Mohd Yusri said police arrested a 39-year-old man in a house at the Taman Merah Jaya in Manjung district on September 26 at around 12.30am for possessing three air guns, one fake pistol, one modified gas cylinder and a pair of handcuffs with a key.

“We also seized 6.34 grams of suspected methamphetamines worth RM350 at the same house.

“The suspect tested positive for drugs and has a criminal record of drug offences. We have remanded the suspect for three days until September 28,” he said.

“The case was investigated under Section 39 A (1) of the Dangerous Drug Act 1952 which carries imprisonment not less than two years and not more than five years and whipping between three to nine strokes.

“As for the offence of possessing the air gun and fake pistol, the case will be investigated under Section 36 (1) of the Weapons Act 1960, which carries jail up to one year or fine not more than RM5,000 or both,” he said.

Mohd Yusri also said police arrested another individual aged 22 at the Terminal Bas Meru Jaya on September 26 at around 5.30pm for possessing 4,535.16 grams of suspected heroin worth RM158,730.

“The suspect tested negative for drugs, but has one criminal record for drug offence. The suspect has been remanded for seven days until October 3.

The case is being investigated under Section 39B of the Dangerous Drug Act 1952 which carries a mandatory death sentence if convicted.