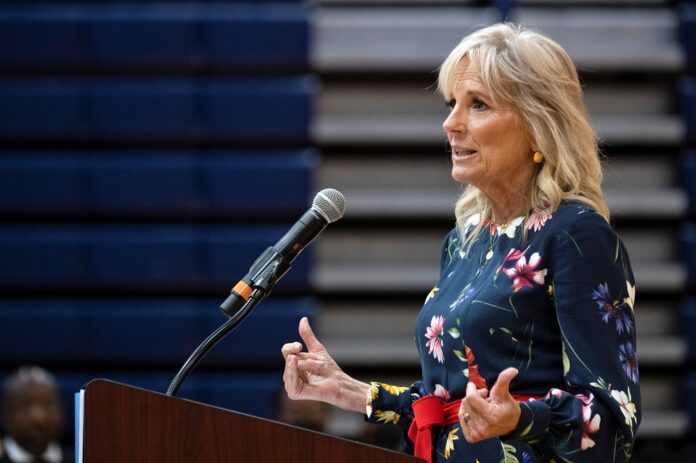 US First Lady Jill Biden was at a grassroots event in Richmond to ‘mobilise Democrats during early voting’ ahead of the November 2 election, party officials said. – Jim Watson/Pool via Reuters

WASHINGTON, Oct 16 – US First Lady Jill Biden campaigned yesterday in Virginia, the battleground in a nail-biting governor’s race seen as a bellwether for next year’s crucial midterm elections.

The 70-year-old educator, who still teaches in the state, was at a grassroots event in Richmond to “mobilise Democrats during early voting” ahead of the November 2 election, party officials said.

Democratic former governor Terry McAuliffe is in a tight race – with the candidates in a virtual tie – against Republican nominee Glenn Youngkin to replace the outgoing Democrat, Ralph Northam.

The majority party usually incurs losses during a president’s first term, but defeat for McAuliffe would send shockwaves through Joe Biden’s Democrats.

Desperate to hang on to the state, the party is sending in the big hitters, with former president Barack Obama set to follow as part of an effort to boost turnout among all-important Black voters.

President Biden, who carried Virginia by 10 points in 2020 but has seen his poll ratings slide since, is also expected.

“Last year, the people voted and democracy prevailed. We have to do it again and elect @TerryMcAuliffe as governor,” he tweeted earlier this week.

Virginia has swung left over the last 15 years – especially among the kind of suburban women seen as likely to warm to the first lady.

But the gubernatorial race has been tightening for weeks, with the five polls in October showing a dead heat or McAuliffe leading by just five points or less.

The White House has sought to play down Virginia’s significance as a harbinger for the 2022 midterm elections, which could see Democrats losing both chambers of Congress.

“I will leave it to other outside analysis to convey that off-year elections are often not a bellwether,” White House Press Secretary Jen Psaki, who lives in Virginia, told reporters on Thursday.

Youngkin has been walking a tightrope, as many Republicans support Donald Trump’s fraudulent campaign to relitigate the 2020 presidential election, which he falsely says was stolen from him.

Desperate to stir up the Republican base, Youngkin has refused to say whether he would have been among the lawmakers who certified the election after the January 6 assault on the Capitol.

But he has disavowed a flag carried during the insurrection to which Republican supporters pledged allegiance at a recent Virginia campaign event.

The Democratic National Committee has tried to make the race a referendum on the previous president, arguing that Youngkin’s priority is “to bring Donald Trump’s dangerous, divisive agenda to Virginia.”

“He’s not just flirting with extremist conspiracies anymore. Instead, he is embracing Donald Trump and the violent attack on our government,” DNC chairman Jaime Harrison said Thursday.

Trump himself has not visited, although he called in to a pro-Youngkin “Take Back Virginia Rally” on Wednesday featuring former White House adviser Steve Bannon.

Perhaps sensing a political bloodletting in 2022, McAuliffe has distanced himself from Washington Democrats, arguing that Biden’s struggle to get key legislation through Congress is complicating his efforts.

“We’ve got frustration with Washington. You know, why haven’t we passed this infrastructure bill? It passed the US Senate with 69 votes two months ago,” McAuliffe told CNN on Sunday.

“We’re tired of the chitty chat up in Washington. Get in a room and get this figured out.”

The first lady began a day of campaigning at a rally in New Jersey, where Governor Phil Murphy is expected to be returned comfortably in an election taking place on the same day as the Virginia vote.

“County by county, Phil will win this,” she told the crowd, to cheers. “We need to look to the future, not the past.” – AFP