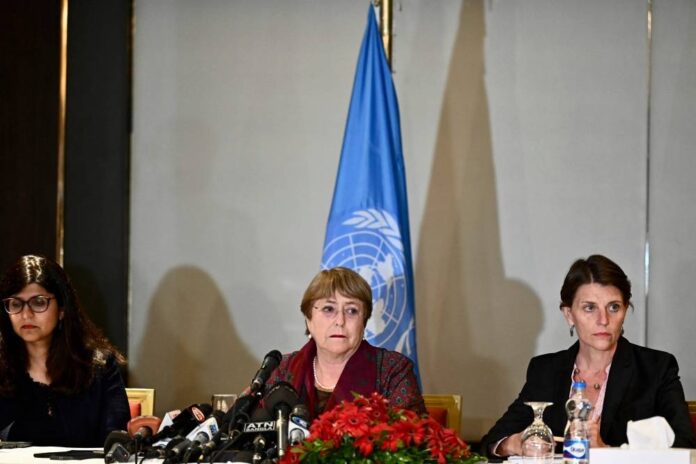 DHAKA, Aug 17 — UN rights chief Michelle Bachelet said today that it remained unsafe for Rohingya refugees to return to their homes in Myanmar, nearly five years after a crackdown there sparked an exodus to neighbouring Bangladesh.

Nearly a million members of the mostly Muslim minority live in a sprawling and squalid patchwork of refugee settlements near Bangladesh’s southern coast.

Most fled their homes after a 2017 Myanmar army offensive that is now subject to a landmark genocide case at the UN’s top court.

Five years later, the refugees refuse to go back without guarantees for their safety and rights in Myanmar, which is now ruled by a military junta after the ouster of its civilian government last year.

Bachelet met with Rohingya community members during a tour of the camps yesterday and said they had expressed “resounding hope” that they would be able to go back to their homes.

“Unfortunately the current situation across the border means that the conditions are not right for returns,” Bachelet told reporters in the Bangladeshi capital Dhaka.

“Repatriation must always be conducted in a voluntary and dignified manner, only when safe and sustainable conditions exist in Myanmar.” Bangladesh has become increasingly impatient with the presence of its huge refugee population, and Bachelet said she was concerned about “increasing anti-Rohingya rhetoric” and scapegoating of the community.

She added that many refugees were fearful for their safety due to the activity of armed groups and criminal gangs.

Security has been a constant issue in the camps, with scores of killings, kidnappings and police dragnets targeting drug trafficking networks.

Two Rohingya community leaders were shot dead earlier this month, allegedly by an insurgent group active in the camps that has been accused of murdering political opponents.

Bachelet was on a four-day visit to Bangladesh before her term as UN high commissioner for human rights ends later this month.

While touring the camps yesterday, she urged the international community to continue to support the Rohingya despite heightened global focus on more recent crises.

She added that the Russian invasion of Ukraine was being keenly felt among the Rohingya, with global food prices soaring and driving up the costs of supporting a population dependent on humanitarian aid.

“I would insist that the international community don’t abandon the Rohingyas and continue supporting and even looking at if they can scale up and support, because of the consequences of the war,” she said.

‘Serious allegations’ Bachelet is the first UN rights chief to visit Bangladesh and her trip included meetings with local activists to discuss accusations of gross abuses by security forces, including extrajudicial killings.

Campaigners say that under Prime Minister Sheikh Hasina, the country’s security forces have killed thousands of people in staged shootouts, while hundreds of others have disappeared.

“I raised my deep concern about these serious allegations with government ministers and highlighted the need for an impartial, independent and transparent investigation into these allegations,” Bachelet told reporters.

The government denies the accusations of disappearances and extrajudicial killings, with one minister saying that some of those who went missing had in fact fled Bangladesh. — AFP