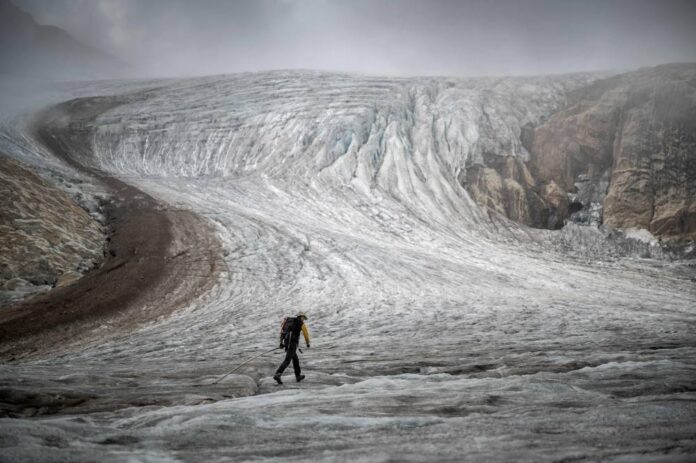 This picture taken on September 2, 2022 above Ulrichen shows glaciologist and head of ‘Glacier Monitoring in Switzerland’ (GLAMOS) network Matthias Huss during a visit with his team on the Gries glacier to takesreadings of measuring equipments. — AFP pic

The study by the Cryospheric Commission (CC) of the Swiss Academy of Sciences laid bare the drastic scale of glacial retreat — which is only set to get worse.

“2022 was a disastrous year for Swiss glaciers: All ice melt records were smashed,” the CC said, adding that a 2 per cent loss in 12 months had previously been considered “extreme”.

Three cubic kilometres of ice — three trillion litres of water — have melted away, the report said.

“It’s not possible to slow down the melting in the short term,” said glaciology professor Matthias Huss, head of Glacier Monitoring in Switzerland, which documents long-term glacier changes in the Alps and is coordinated by the CC.

If carbon dioxide emissions are reduced and the climate protected, “this might save about one third of the total volumes in Switzerland in the best case”, he told AFP.

Otherwise, the country “will be losing almost everything by the end of the century”.

At the start of the year, the snow cover in the Alps was exceptionally light, then a large volume of sand dust blew in from the Sahara Desert between March and May, settling on the surface.

The contaminated snow absorbed more heat and melted faster, depriving the glaciers of their protective snow coating by early in the European summer.

The continuous heat between May and early September therefore ravaged the glacial ice.

By mid-September, the once-thick layer of ice that covered the pass between the Scex Rouge and Tsanfleuron glaciers had completely melted away, exposing bare rock that had been frozen over since at least the Roman era.

And in early July, the collapse of a section of the Marmolada glacier, the biggest in the Italian Alps, killed 11 people and highlighted how serious the situation had become.

According to an Intergovernmental Panel on Climate Change report published in February, the melting of ice and snow is one of the 10 key threats from climate change.

“The loss was particularly dramatic for small glaciers,” the CC said.

In the Engadine and southern Valais regions, both in the south, “a four to six-metre-thick layer of ice at 3,000 metres above sea level vanished,” said the report.

Significant losses were recorded even at the very highest measuring points, including the Jungfraujoch mountain, which peaks at nearly 3,500 metres.

“Observations show that many glacier tongues are disintegrating and patches of rock are rising out of the thin ice in the middle of glaciers. These processes are further accelerating the decline,” said the report.

“The trend also reveals how important glaciers are to the water and energy supply in hot, dry years,” the report stressed — something to consider given that hydroelectricity provides more than 60 per cent of Switzerland’s total energy production.

The glacial meltwater in July and August alone would have provided enough water this year to completely fill all the reservoirs in the Swiss Alps.

But Huss said that if the country experienced this year’s meteorological conditions in 50 years’ time, “the impact would be much stronger, because in 50 years, we expect that almost all glaciers are gone and therefore cannot provide water in a hot and dry summer”.

The melting of the glaciers has also had some unexpected consequences.

Hikers are regularly making macabre discoveries as bodies are being freed from the ice they have been encased in for decades or even centuries.

The melting can also be a boon for archaeologists who suddenly have access to objects that are thousands of years old.

Meanwhile the melting of a glacier between Italy and Switzerland has moved the border that ran along the watershed, forcing lengthy diplomatic negotiations. — AFP