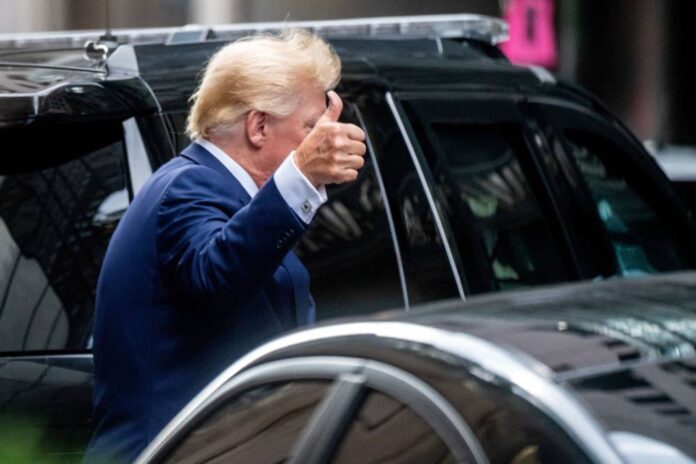 Donald Trump is seeking a quick end to the defamation lawsuit by an author who claims he raped her more than a quarter century ago. — Reuters pic

NEW YORK, Sept 29 — Donald Trump is seeking a quick end to the defamation lawsuit by an author who claims he raped her more than a quarter century ago.

A lawyer for the former US president asked a federal judge in Manhattan on Wednesday to substitute the United States as the defendant in E. Jean Carroll’s lawsuit, a move that would end her case because the government cannot be sued for defamation.

The request came one day after the 2nd US Circuit Court of Appeals said Trump was a federal employee when he branded Carroll a liar, but left it to a Washington, D.C., appeals court to decide whether Trump acted as president when he spoke.

In a letter to US District Judge Lewis Kaplan in Manhattan, Trump’s lawyer Alina Habba said the decision meant the government “must be substituted as a defendant.”

She also asked to put the case on hold, saying it would be “highly prejudicial” for Trump to spend time and money preparing for trial if the Washington court ruled in his favour.

Roberta Kaplan, a lawyer for Carroll, said “nothing has changed” and the case should proceed.

“The parties have been cooperatively engaged in discovery at Donald Trump’s request, and nothing has happened that should change that,” she said in an interview. “There has been no final determination by an appellate court that the government should be substituted in.”

Carroll sued Trump in November 2019, five months after he denied raping her in a dressing room of department store Bergdorf Goodman in the mid-1990s and said “she’s not my type.”

The former Elle magazine columnist still plans to sue Trump for battery and inflicting emotional distress in a separate lawsuit in November.

Carroll plans to invoke a new state law giving accusers a one-year window to sue over alleged sexual misconduct even if the statute of limitations expired long ago.

Tuesday’s decision set aside Kaplan’s ruling that Trump was neither acting as president when discussing Carroll, nor a federal employee for purposes of her case.