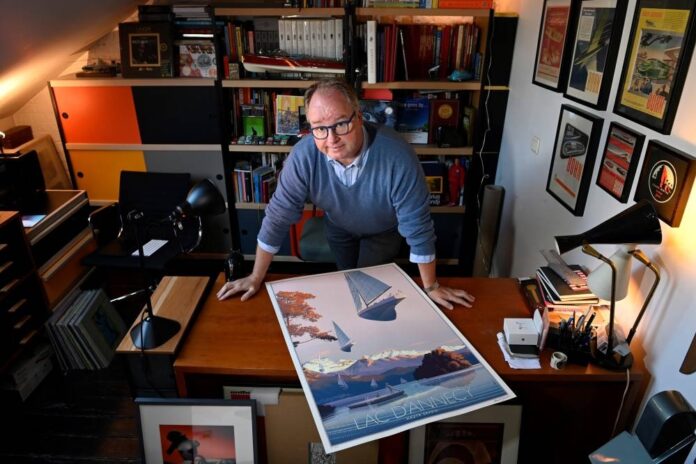 PARIS, Sept 29 — It’s a hobby that can turn into the real thing — some fan-art film posters are so good that they end up in galleries or even earn the artist a chance to work with Hollywood’s biggest names.

That has been the case for Belgian artist Laurent Durieux, 52, whose pastel-toned, retro posters have their own fan base, including filmmakers.

Durieux remembers falling out of his chair when he received a congratulatory email from Steven Spielberg for his reimagined version of the Jaws poster.

It was a bold move to offer a new take on one of cinema’s most iconic images, but his version is a classic example of fan-art, which often makes playful, subtle references to the movie.

Rather than the terrifying shark of the original, Durieux shows a peaceful beach scene with just a hint of the danger provided by the shark fin shape on a parasol.

“I like to tell my own version of the film, while being respectful of the director’s vision,” he told AFP at the Annecy Animation Festival, for which he designed the poster and where he presented his works.

“I’m saying the same thing but in a slightly left-field way. I’m looking for elements that the director, and especially the PR, have not highlighted,” he added.

“The big difference is that my posters don’t have to worry about real marketing.”

A letter from Spielberg was one thing, but another legendary director, Francis Ford Coppola, went one better by actually using Durieux’s design as the cover art for the re-release of Apocalypse Now.

“We worked hand in hand. He was a real fan,” said Durieux.

His take on 1969 classic French film The Swimming Pool was similarly used for its re-release last year.

All his posters contain neat insider references, such as the fire station that doubles as a ghost trap for Ghostbusters.

Or for The Shining, he opted for a tricycle featuring the number 237 — a reference to the forbidden room that is instantly recognisable to fans of the classic horror by Stanley Kubrick.

His silkscreen prints take up to three months to make and sell for around US$100 (RM463) a piece, but some have since been resold for up to US$7,000.

Durieux is far from the only artist to create his alternative posters — “fan art” is a popular genre on Instagram under hashtags such as #AlternativeMoviePosters or #altposter.

The best examples have shown up in well-established galleries from Brooklyn to Paris, while a Texas-based store, Mondo, specialises in the sector and commissioned many of Durieux’s works.

A dedicated auction in July at Heritage Auctions in the United States brought in more than US$100,000.

Thanks to their quality and carefully limited editions, they have become “true works of art”, said Hope Grubbs, a manager at the auction house. — AFP