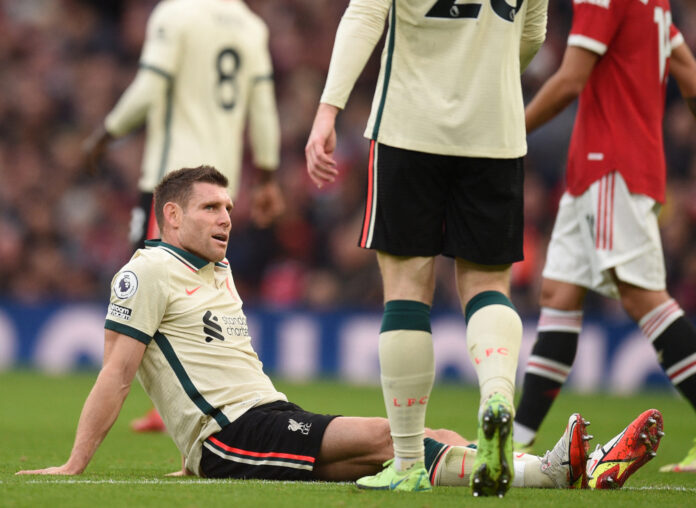 LONDON, Oct 26 — Liverpool midfielder James Milner will be out until next month’s international break after picking up a hamstring injury in last weekend’s 5-0 victory at Manchester United, assistant manager Pepijn Lijnders said today.

Speaking ahead of tomorrow’s League Cup tie against Preston North End, Lijnders added that midfielder Naby Keita had avoided a serious injury after a poor tackle by United’s Paul Pogba that resulted in a red card for the Frenchman.

Both Milner and Keita were substituted in the game at Old Trafford.

“Millie felt his hamstring getting tight. Looks like he’s out until the international break,” Lijnders told reporters.

“Naby, I think we should speak about the Video Assistant Referee. It’s a major advantage to protect players.

“We sometimes discuss and whine about ref and VAR, but that’s why it’s there… to protect players. Luckily Naby’s foot was not on the ground and it was just a bruise.”

Lijnders said midfielder Thiago Alcantara was closing in on a return following a calf injury, while Fabinho had also shaken off a knee issue that ruled him out of the United game.

Liverpool host Brighton & Hove Albion in the Premier League on Saturday after the midweek Cup clash.

“Brighton will be close for Thiago, but probably not. He’s almost back. Fabinho isn’t ruled out for Saturday,” Lijnders added. — Reuters