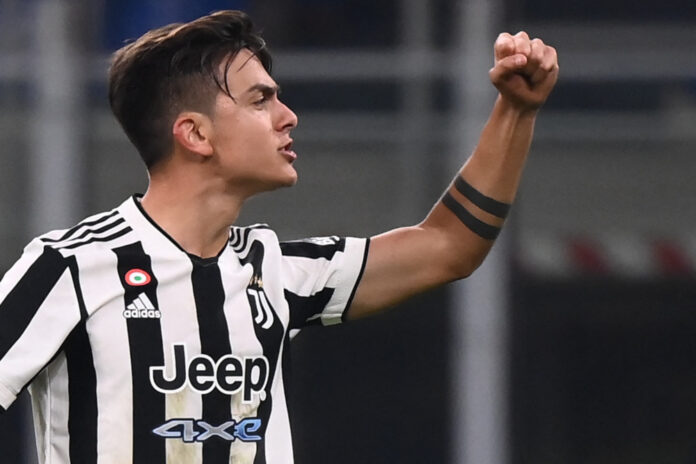 Juventus forward Paulo Dybala celebrates after scoring an equaliser during the Italian Serie A football match between Inter and Juventus, October 24, 2021 at the Giuseppe-Meazza (San Siro) stadium in Milan. — AFP pic

TURIN, Oct 26 — Juventus coach Massimiliano Allegri said forwards Paulo Dybala and Federico Chiesa will both start against Sassuolo in Serie A tomorrow, as the Turin club look to rediscover their form in front of goal.

While Juve have turned their season around of late and are unbeaten in their last nine games in all competitions, Allegri’s side have not scored more than once in a match in their previous five encounters.

Alvaro Morata and Dejan Kulusevski were the strike pairing for Juve’s weekend trip to Inter Milan, with neither offering any real threat in front of goal before substitute Dybala’s 89th minute penalty salvaged a 1-1 draw.

“As for Dybala, he’s a starter (against Sassuolo),” Allegri told a news conference today.

“I think it’s a characteristic of the team to divide the goals, having sold one (Cristiano Ronaldo to Manchester United) who scored 30 last season. Tomorrow I will play Dybala and play Chiesa.

“Dybala is growing in condition. This year his goals will be as important as we need the goals from everyone. Tomorrow we need to be compact, play better and score two goals that we haven’t scored for a long time.”

Juve had failed to win any of their opening four league matches for the first time in 60 years this season, but Allegri has helped revitalise his side.

“The points missed at the beginning of the season unfortunately do not allow us to have a great margin for error,” Allegri added. “The victory over (AS) Roma two weeks ago allowed us to go to Milan to play for a better position in the standings.

“The draw is important if we win tomorrow, otherwise it is like to have lost. We are not in a position to be able to make mistakes.”