Liverpool miss Salah and Mane but no excuse, says Klopp 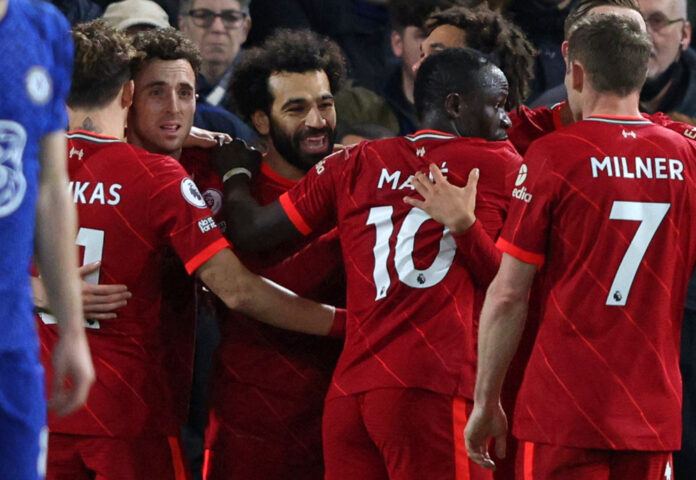 Liverpool midfielder Mohamed Salah is mobbed by teammates after scoring the team’s second goal during the English Premier League football match between Chelsea and Liverpool at Stamford Bridge in London, January 2, 2022. — AFP pic

LONDON, Jan 14 — Liverpool are missing Mohamed Salah and Sadio Mane, on Africa Cup of Nations duty, but a goalless draw against 10-man Arsenal yesterday cannot be blamed on their absence, according to manager Jurgen Klopp.

Liverpool were frustrated in the League Cup semi-final first leg at Anfield with the Reds blocked by a determined Arsenal defensive display after Granit Xhaka was sent off in the 24th minute.

Egypt forward Salah is the Premier League’s top scorer with 16 goals while Senegal’s Mane has contributed eight to Liverpool’s tally.

“The situation is clear. They are not here and they are world class players. So that’s how it is. Do we miss them? Yes,” Klopp told reporters ahead of Liverpool’s home game against Brentford on Sunday.

“But we had with Sadio and Mo before some struggles against 10 men, when they were both on the pitch and we still couldn’t create enough,” added the German. “You have to break down a really low block and that in football is the most difficult thing.

“It was always like this. We couldn’t do that last night, we were not good enough in moments but that’s the situation. Nothing to do with who’s not here.

Sunday’s game will be Klopp’s 350th in charge of Liverpool and it comes against opponents who drew 3-3 in the fixture in London last September.

The German said he was proud of his record and hoped to enjoy the next few years as well but preferred to focus on the next game.

Klopp said Liverpool, third in the league and 11 points behind Manchester City but with a game in hand, had no injuries and expected Brentford to be tough opponents again.