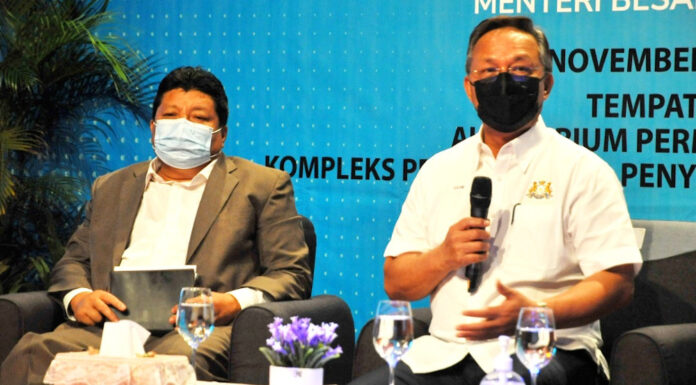 JOHOR BARU, Nov 11 — The Johor government is of the opinion that its federal counterparts should consider opening the long-awaited land Vaccinated Travel Lane (VTL) at the Causeway at the same time with the air VTL between Kuala Lumpur International Airport (KLIA) and Changi Airport, which begins on November 29.

Johor Mentri Besar Datuk Hasni Mohammad said the suggestion was conveyed to the relevant ministry last week as the state government was confident that it can assist with the land opening as well.

He said the matter had also been discussed, as the state government understood the need to make it easier for Malaysians working in Singapore to commute daily.

“Hopefully, the federal government can consider this suggestion as the figures allowed to enter Singapore using the land VTL for work are only between 300 and 500 people a day,” explained Hasni.

He said this during a townhall session with Johor media organisations and the Ihsan Johor Economic Stimulus Package (PRE 3.0) appreciation ceremony held at the Johor RTM Auditorium here yesterday evening.

On Monday, Malaysia and Singapore announced that they would reopen their mutual border with the VTL between KLIA and Changi Airport on November 29.

Under the VTL, fully-vaccinated travellers would be able to travel between both countries, subject to a Covid-19 test, in lieu of serving a quarantine or Stay-Home Notice.

Hasni said the implementation of the land VTL can be made a reality as it would benefit both countries’ economy.

He said among the suggestions mooted by the state government was for the use of public transportation such as buses and trains to be use for the land VTL as it can be done in a controlled manner and according to the set time, similar with air travel.

“The state government had also agreed to share the cost of building a second Business Travel Centre (BTC) at the Causeway, after the federal government had previously allocated RM10 million for the BTC on the Second Link crossing, which is expected to start by next year.

“We will allocate RM5 million, while the other half will be borne by the federal government to build a second BTC at the Causeway that can test and screen Covid-19 for up to 100 travellers at a time,” said Hasni.

Hasni, who has been actively promoting for Johor’s land border opening, also said the state government has applied to the Immigration Department for the BTC to operate round-the-clock to enable more individuals to travel between Malaysia and Singapore.

On a separate matter, Hasni expressed confidence that Johor will be able to achieve a growth rate of 5 to 7 per cent next year.

“At present, we still don’t know whether Covid-19 infections will end in the near future, as new cases continue to fluctuate.

“However, we are aware that existing investments need to be maintained, as they provide jobs to locals to spur the local economy,” he said.

Hasni said that immediate focus will also be given to micro-business owners, small and medium enterprises (SME) and the unemployed.

He said this was to prepare Johor for the eventual reopening of its economy.