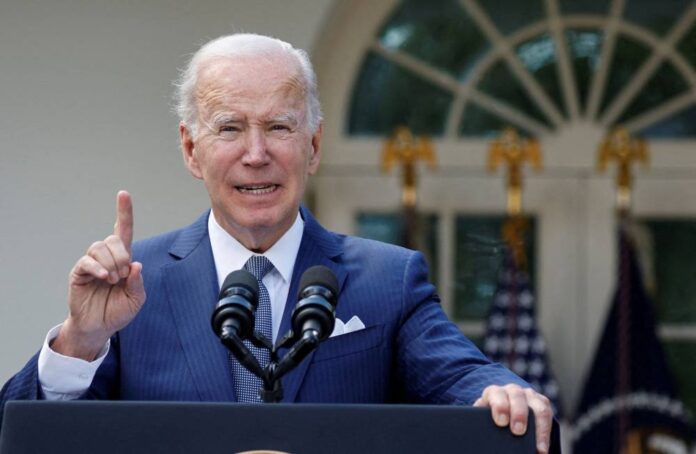 Biden said he was “gravely concerned” about reports of the intensifying repression of protesters and said Washington stood with “all the citizens of Iran who are inspiring the world with their bravery”. — Reuters pic

PARIS, Oct 4 — The United States will impose “further costs” on Iran for its lethal crackdown on protests sparked by the death of Mahsa Amini, President Joe Biden announced, drawing accusations of “hypocrisy” from Iran on Tuesday.

Anger over her death has sparked the biggest wave of protests to rock Iran in almost three years and a state crackdown that has seen scores of protesters killed and more than 1,000 arrested.

“This week, the United States will be imposing further costs on perpetrators of violence against peaceful protesters,” Biden said in a statement Monday. “We will continue holding Iranian officials accountable and supporting the rights of Iranians to protest freely.”

Biden said he was “gravely concerned” about reports of the intensifying repression of protesters and said Washington stood with “all the citizens of Iran who are inspiring the world with their bravery”.

Rights groups voiced deep concern after Iranian riot police used tear gas and paintball guns against hundreds of students at Tehran’s Sharif University of Technology on Sunday night, with video footage showing detainees being taken away with fabric hoods over their heads.

“Women, Life, Freedom,” the young female protesters chanted as they marched down the central strip of a busy highway in Marivan in footage that AFP has not independently verified.

The US president gave no indication of what measures he was considering against Iran, which is already under crippling US economic sanctions largely related to its controversial nuclear programme.

Iran on Tuesday accused the US leader of “hypocrisy” in invoking human rights to impose fresh punitive measures.

“It would have been better for Mr Joe Biden to think a little about the human rights record of his own country before making humanitarian gestures, although hypocrisy does not need to be thought through,” foreign ministry spokesman Nasser Kanani said in an Instagram post, reported by Iranian media.

“The US president should be concerned about the numerous sanctions… against the Iranian nation, the sanctions whose imposition against any nation is a clear example of a crime against humanity,” he added.

The riots “were engineered by America and the occupying, false Zionist regime, as well as their paid agents, with the help of some traitorous Iranians abroad”, Khamenei said.

The unrest has overshadowed diplomatic efforts to revive a 2015 nuclear deal between Iran and major powers which had come close to a breakthrough in recent months before stalling again.

But White House Press Secretary Karine Jean-Pierre stressed that the “problems with Iran’s behaviour” are separate from efforts to revive the nuclear deal, which Washington will pursue “as long as we believe” it is in US national security interests.

In his first public comments on Amini’s death, 83-year-old Khamenei stressed on Monday that Iranian police must “stand up to criminals”.

Khamenei said “some people, without proof or an investigation, have made the streets dangerous, burned the Koran, removed hijabs from veiled women and set fire to mosques and cars”.

He added that “this is not about hijab in Iran”, and that “many Iranian women who don’t observe the hijab perfectly are among the steadfast supporters of the Islamic republic”.

On Tuesday, an official said singer Shervin Hajipour — arrested after his song Baraye (“For”), with lyrics taken from social media posts about the reasons people were protesting, went viral — had been released on bail.

Iran has repeatedly accused outside forces of stoking the protests and last week said nine foreign nationals — including from France, Germany, Italy, the Netherlands and Poland — had been arrested.

At least 92 protesters have been killed so far in the Mahsa Amini rallies, said Oslo-based group Iran Human Rights, which has been working to assess the death toll despite internet outages and blocks on WhatsApp, Instagram and other online services.

At least 12 members of the security forces have been reported killed since September 16. — AFP