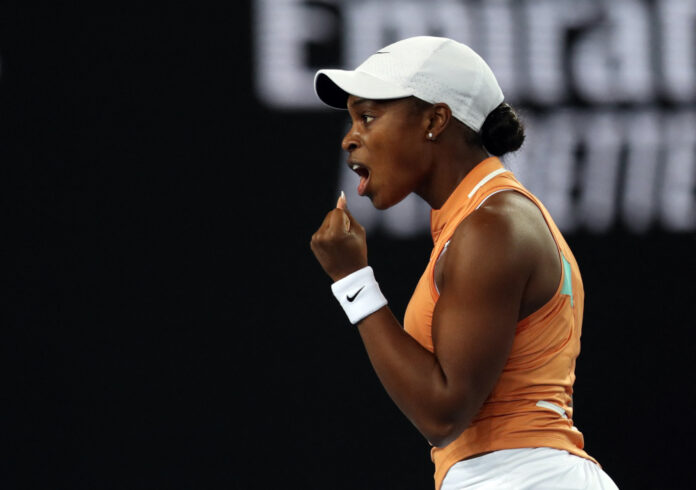 Sloane Stephens of the US reacts during her first round match against Britain’s Emma Raducanu at Melbourne Park, Australia, January 18, 2022. — Reuters pic

MELBOURNE, Jan 18 — Sloane Stephens knows only too well the vagaries of life as a professional tennis player and offered some sage advice to Emma Raducanu after being beaten by the British teenage sensation in the first round of the Australian Open today.

The rusty American was beaten 6-0 2-6 6-1 in the battle between a former US Open champion and the current one who rocketed to stardom in astonishing fashion last September.

In some ways the match was a microcosm of what the 19-year-old Raducanu can expect over the course of the next few years as she attempts to live up to her feat of winning the US Open as a qualifier, without dropping a set.

There was a sensational 17-minute first set in which she dropped only four points, then a worrying dip as errors crept into her game and a possible defeat loomed.

In the end, Raducanu showed great maturity to regroup and dominate the deciding set, even if it was closer than the scoreline suggested.

Former world number three Stephens reached her first Grand Slam semi-final in Australia nine years ago and claimed the US Open in 2017 as an unseeded player just a couple of months after returning from nearly a year out with injury.

She also reached the 2018 French Open final but since then deep Grand Slam runs have proved elusive.

Asked what advice she would give Raducanu, Stephens said the Briton must be prepared for the ups and downs.

“I would say, the only same situation is that we won the US Open, but our situations are very different,” Stephens, 28, told reporters. “I think she is carrying a whole country.”

“And I think her game style, how young she is, it’s a little bit of a different dynamic than I had.

“Because she is so young it’s definitely a long road. She hasn’t been through much of anything yet, so there will definitely be some ups and downs and some crazy experiences that happen throughout, it’s only the beginning.”

Raducanu was playing only her fourth senior tournament at the US Open and is embarking on her first year on Tour.

Her momentous victory has raised the expectation levels sky high but the way she dealt with her first Grand Slam match since her New York fairytale and her first match against a former Grand Slam champion was encouraging, especially the poise she showed in her first deciding set at this level.

“I think 2022 is all about learning for me. Being in those situations of winning a set and then having to fight in a decider is definitely just all accumulating into a bank of experience that I can tap into later down the line,” Raducanu said. “Very happy today I can add to that.

“I think it’s a great step forward for me to come out here and win my first match here in Australia against Sloane.” — Reuters