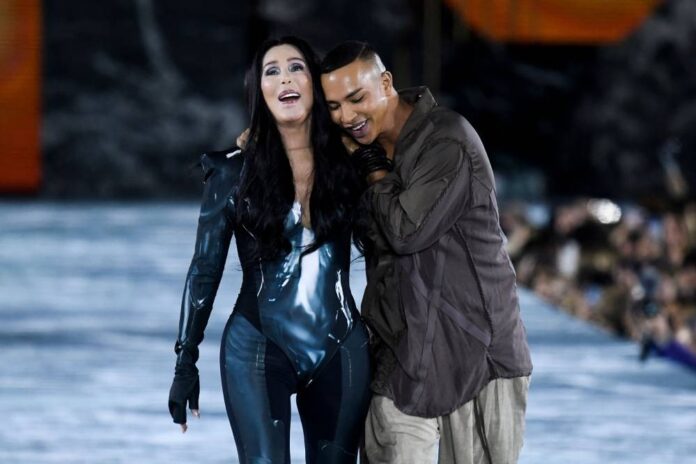 US singer Cher walks next to French fashion designer Olivier Rousteing as she presents a creation for the Balmain Spring-Summer 2023 fashion show during the Paris Womenswear Fashion Week, in Paris, on September 28, 2022. — AFP pic

PARIS, Sept 29 — French designer Olivier Rousteing pulled out all the stops on Wednesday in his latest collection for Balmain at Paris Fashion Week, closing his show with US star Cher on the catwalk.

The show began with Cher on a screen, saying: “All of us invent ourselves. Some of us just have more imagination than others.”

But that was only a teaser before Cher appeared in person with her 1999 hit Strong Enough booming around the event at a rugby stadium.

Dubbed the “Balmain Festival”, Rousteing unveiled his designs with clear African influences and mythological references including Apollo and Venus.

A particularly poignant moment during the finale came when black models walked down in a variety of textured dresses, some with the corseted look Rousteing favours and a song by Youssou N’Dour featuring the lyrics: “And when a child is born into this world, it has no concept, of the tone the skin is living in.”

After the show ended, the rising Nigerian star of Afrobeats, Ckay, performed on stage for thousands attending the event.

The devil was in the detail, with straw dresses as well as models wearing large gold earrings, large-brimmed hats and necklaces almost completely covering the neck, while others had nose rings.

The glamour oozed at the Balmain event, with celebrities attending including US singer and actor Dove Cameron, Belgian artist Stromae and American reality TV star and close friend of Rousteing, Kylie Jenner.

There were stars on the catwalk too with famous American plus-size model Ashley Graham modelling one of Rousteing’s creations.

Rousteing, 37, has been artistic director at Balmain since 2011 and is known for pushing the brand into new territory and working with celebrities such as Jenner and her famous half-sister Kim Kardashian.

As cosmetics becomes an ever-bigger industry, Balmain this week announced plans to launch a beauty line as part of a partnership with Estee Lauder. — AFP