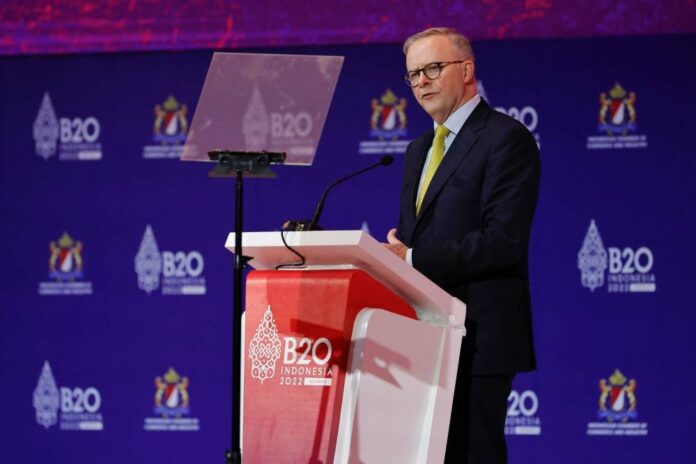 Australian Prime Minister Anthony Albanese delivers his speech during the B20 Summit, ahead of the G20 leaders’ summit, in Nusa Dua, Bali November 14, 2022. — Reuters pic

SYDNEY, Nov 15 — Australia will be looking to stabilise its relationship with China but does not expect a swift resolution to differences between the trade partners when Prime Minister Anthony Albanese meets with President Xi Jinping today.

Ties between Australia and China have deteriorated sharply in recent years, and Beijing in 2020 blocked a raft of Australian agricultural and mineral exports over Canberra’s call for an inquiry into the origins of the Covid-19 pandemic.

In June, Beijing’s envoy called on Albanese’s new Labour government — which came to power in a national election the previous month — to “take action” to reset ties.

Albanese yesterday said there were no preconditions for the meeting with Xi at the Group of 20 (G20) summit in Bali.

The meeting is significant for ending China’s long freeze on all high-level political dialogue, without Australia backtracking on any of its policies, said Richard Maude, executive director of the Asia Society Australia.

“In short, Australia has not bent to China’s will,” he said.

The meeting comes as China seeks to enter the Comprehensive and Progressive Agreement for Trans-Pacific Partnership (CPTPP) free trade pact, which requires the approval of all 11 members, including Australia.

Treasurer Jim Chalmers said today not all differences will be solved in one meeting, although Australia wants to see trade restrictions worth A$20 billion a year lifted.

“Part of stabilising this relationship would mean ideally the removal of those restrictions,” Chalmers told ABC Radio.

Australia Foreign Minister Penny Wong in a speech on Sunday, sought to differentiate Albanese’s Labour government from its predecessor, which she said had tried to exploit differences with China for domestic political gain.

Australia under Labour would be “calm and consistent” on China, she said.

James Laurenceson, director of the Australia-China Relations Institute at the University of Technology Sydney, said the meeting matters because Xi is the only person with the authority in China to address Australia’s trade grievances.

“Xi might order the removal of sanctions, if not overnight, then gradually over time,” Laurenceson said. The meeting also sends a “strong signal … to the Chinese bureaucracy that Australia is no longer to be shunned,” he said.

National Farmers Federation acting CEO Warwick Ragg said: “Farmers welcome any moves to revive and improve access to Chinese markets and are hopeful this week’s meeting makes inroads towards that.”

Today’s meeting will be the first between Xi and an Australian prime minister since 2016.

Australia’s relation with China began to sour in 2017 when it introduced laws to deal with what it said was Chinese interference in Australian politics.

Beijing was also angered by Canberra’s 2018 decision to ban Huawei from its 5G network on national security grounds, a decision followed by other Western nations.

Chalmers said Australia is “deeply concerned at detention of those two people.” — Reuters