A #MeToo scandal too far in France? 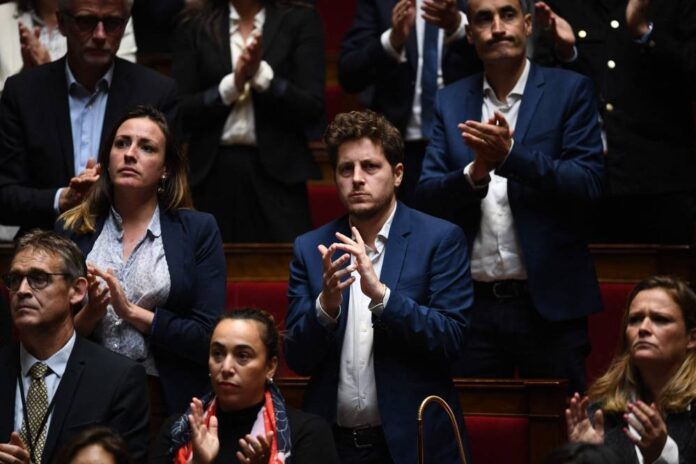 Europe-Ecologie-Les Verts Member of Parliament and of the left-wing coalition NUPES Julien Bayou (centre) applauds as he attends a session of questions to the government at The National Assembly in Paris October 4, 2022. — AFP pic

PARIS, Oct 5 — The latest #MeToo scandal in France followed a familiar playbook: allegations of abuse against a senior politician, intense media attention, then a resignation. Except this time, some feminists wonder if the campaign to root out male misconduct has gone too far.

At the centre of the maelstrom is Julien Bayou, the 42-year-old leader of the pro-feminist EELV green party who resigned in late September after being accused by a rival lawmaker from his party of behaviour “that causes mental breakdowns in women”.

The full facts remain unclear — no internal party or police enquiry has been completed — but Bayou’s former partner was said to have suffered from depression after the end of their relationship in November 2021.

That has raised questions about whether he is liable for her mental distress — no physical or sexual abuse was alleged — as well as his right to privacy.

“It was a very painful break-up with suffering on both sides,” Bayou told Le Monde newspaper in an interview on Tuesday in which he denied any criminal behaviour or “psychological violence”.

“I am not responsible for the suffering, which is real, of my ex-partner,” he said.

He claimed he had been the victim of modern-day McCarthyism, a reference to efforts in the United States of the 1950s to root out communists during which simple accusations of left-wing sympathies were enough to drive many people from their jobs.

Commenting on fellow EELV lawmaker Sandrine Rousseau, who publicised his break-up and his ex’s mental struggles while taking part in a television show, he said: “She went too far.”

On Tuesday evening, he added during a televised interview: “It’s irresponsible to… make accusations without corroborating” them.

“I am innocent of the facts that have not been presented to me and against which I cannot defend myself,” he said.

Liberation newspaper also revealed at the weekend that a group of feminists had been investigating Bayou privately, speaking to his former partners with a view to building a case against him.

He likened the experience to being “put under surveillance”.

The case has sparked an internal crisis in EELV at the same time as its larger left-wing ally, the France Unbowed party, has been embarrassed by news that one of its senior parliamentarians slapped his wife.

Three ministers in President Emmanuel Macron’s governments since 2016 have been accused of rape, most recently social cohesion minister Damien Abad, who was sacked in July. All three deny the allegations.

But Bayou has found support among some of the usual backers of the #MeToo movement, which since 2017 has helped highlight the prevalence of sexual abuse by men.

“A break-up, even more so when it is the result of a unilateral decision, is violent by its nature,” read an editorial defending Bayou in the left-wing Liberation last week.

Socialist former women’s rights minister Laurence Rossignol referred to “dysfunctions” in the way he had been treated, adding: “These things should not be sorted out in television studios.”

And well-known feminist writer Caroline Fourest raised her misgivings, saying that women needed to continue to denounce their aggressors, but that journalists and politicians needed to be aware of the risk of allegations being instrumentalised.

“Today there are men and women who are collateral victims of the explosion in speaking out,” she told L’Opinion magazine.

In Bayou’s case, his accuser has not spoken publicly or through a lawyer about her allegations, leaving the claims by Rousseau — an ambitious, internal rival — as the only evidence against him.

In July, Bayou’s former partner approached an internal committee of the EELV party tasked with investigating allegations of sexual misconduct, but then declined to testify.

That meant the enquiry stalled, leaving Bayou unable to give his version of events despite asking to be auditioned on four occasions.

Justice Minister Eric Dupond-Moretti said he was “fed up” with efforts by political parties to set up their own investigations into sexual harassment.

“The judicial system is the only place in a democracy where justice can be delivered,” he told a committee in parliament on September 27.

But many feminist campaigners disagree.

They point out that the overwhelming majority of rape or sexual assault cases conclude without convictions and that women often decline to lodge police complaints because they view it as pointless.

Many highly regulated professions — from medics to lawyers — also have internal disciplinary processes that sanction members outside of the judicial system.

Rousseau said on Sunday she had no regrets about denouncing her colleague “at a moment when there was a need for transparency.”

“I am protecting the struggle of women and I will continue to protect it. I won’t give up,” she told France 3.

Bayou remains a member of parliament and has vowed to clear his name. — AFP