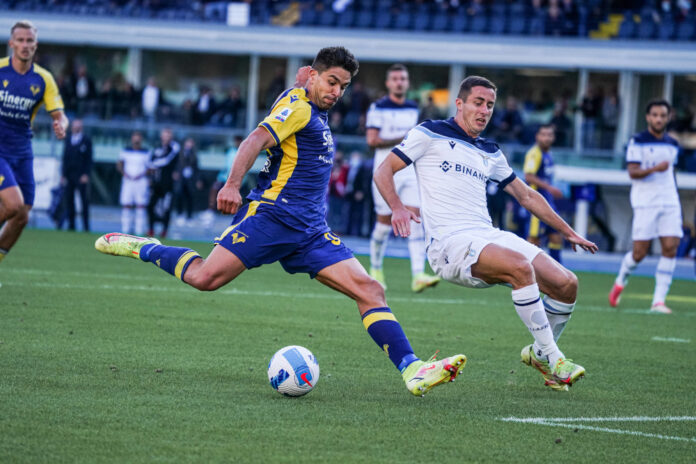 Hellas Verona’s Giovanni Simeone in action during the Serie A match against Lazio at Marcantonio Bentegodi Stadium October 24, 2021. — xLucaxTaddeox pic via Reuters

MILAN, Oct 24 — Giovanni Simeone struck all four goals as Verona hammered Lazio 4-1 in Serie A today, while Fiorentina closed in on the Champions League places with a 3-0 win over Cagliari.

Simeone, the son of former Lazio player and long-time Atletico Madrid coach Diego, struck twice in each half to sink Maurizio Sarri’s Lazio, who briefly threatened when Ciro Immobile halved the deficit seconds after the break.

Verona move up to 11th on 11 points after starting the day hovering above the drop zone, while Lazio drop to eighth, a point behind city rivals Roma who are fourth ahead of their clash with league leaders Napoli later today.

Sarri had selected the great-grandson of Italian dictator Benito Mussolini in his squad for the match, but did not play him.

Defender Romano Floriani Mussolini, 18, came through the youth ranks at the club after previously playing for their local rivals Roma.

Fiorentina meanwhile are sixth, level on points with Roma, after recovering from two painful recent defeats with their hammering of Cagliari.

Vincenzo Italiano’s side had lost their last two matches against league leaders Napoli and promoted Venezia, with the latter provoking fierce protests from fans which targeted striker Dusan Vlahovic.

The fans at the Stadio Artemio Franchi in Florence whistled their star forward before Sunday’s match, the Serb guilty of not renewing his contract which is set to expire at the end of next season.

Vlahovic, 21, refused to take the 21st-minute penalty which captain Cristiano Biraghi scored to put the hosts ahead.

However, he did score his team’s third four minutes after the break following Nicolas Gonzalez’s strike which doubled their lead three minutes before half-time.

Sunday ends with champions Inter Milan facing fierce rivals Juventus in what is traditionally one of the biggest matches of the season. — AFP