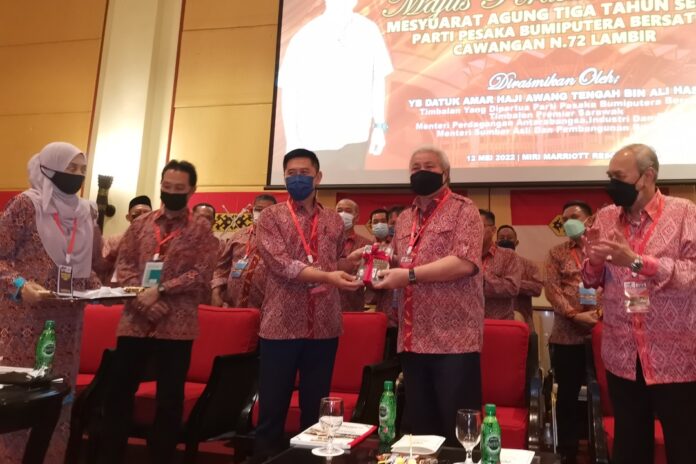 The PBB deputy president and Sarawak deputy premier however said in order to achieve this, PBB as the backbone of Gabungan Parti Sarawak (GPS) must continue to maintain unity within the party.

“PBB must continue to be the lynchpin of GPS in fighting for the state’s rights and best interests of her people,” he said when officiating PBB Lambir branch’s triennial general meeting (TGM) here yesterday.

He said party elections – due this year end – should be held in a family spirit, and called on members to maintain unity and harmony post-party polls.

“History has shown that splits and leadership tussles have brought down once-mighty political parties in Sarawak.

“We (PBB) must learn from these lessons, such as the demise of SNAP (Sarawak National Party) which was a strong party with the first chief minister in Stephen Kalong Ningkan, and later deputy chief minister Datuk Amar James Wong, that is now no more due to splits and leadership tussles,” he said.

Meanwhile, PBB permanent chairman Tan Sri Mohamad Asfia Awang Nassar, who also spoke, echoed Awang Tengah’s call for unity within the party, saying unity and consensus is needed across the board if PBB is to achieve its goals.

Earlier, PBB Lambir chairman Dr Ripin Lamat praised the branch’s Women and Youth wings for reaching a consensus which saw all posts uncontested in the TGM.

The election for the branch’s main committee was scheduled for later yesterday. – Borneo Post