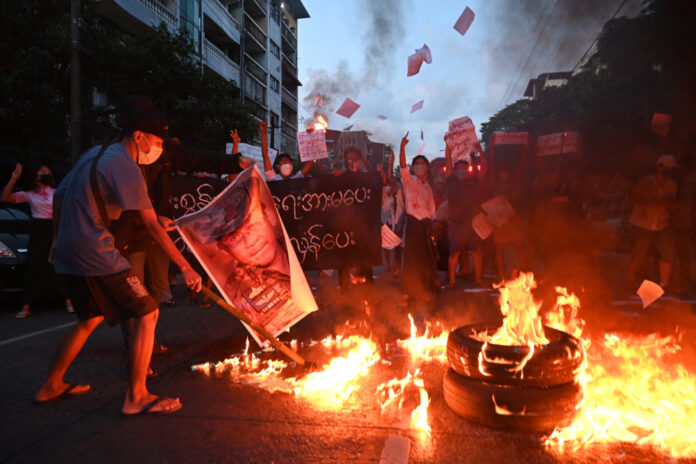 Protesters burn a picture of Myanmar’s military chief Min Aung Hlaing during a demonstration against the military coup in Yangon, November 10, 2021. — AFP pic

NEW YORK, Nov 11 — The UN Security Council expressed deep concern yesterday over increased violence across Myanmar and in a rare statement, agreed by the 15-members, called for an immediate end to fighting and for the military to exercise utmost restraint.

There are reports of a buildup of heavy weapons and troops in Chin state, suggesting an imminent army attack to flush out militia groups formed after the military ousted Aung San Suu Kyi’s elected government in a coup on February 1.

“The Members of the Security Council expressed deep concern at further recent violence across Myanmar. They called for an immediate cessation of violence and to ensure the safety of civilians,” the statement said.

Myanmar’s junta has made no comment on the situation in Chin, a volatile border region that has become a forefront of resistance against military rule.

Myanmar has been paralysed by protests and violence since the coup, with the junta struggling to govern and facing armed resistance from militias and ethnic minority rebels allied with a shadow government that it calls “terrorists”.

“The Members of the Security Council … reiterated their deep concern at developments in Myanmar following the declaration of the state of emergency imposed on 1 February and their call on the military to exercise utmost restraint,” said the statement, drafted by Britain.

“They encouraged the pursuance of dialogue and reconciliation in accordance with the will and interests of the people of Myanmar,” the statement said.

The council also called for full, safe and unhindered humanitarian access to all people in need and the protection, safety and security of humanitarian and medical personnel. — Reuters