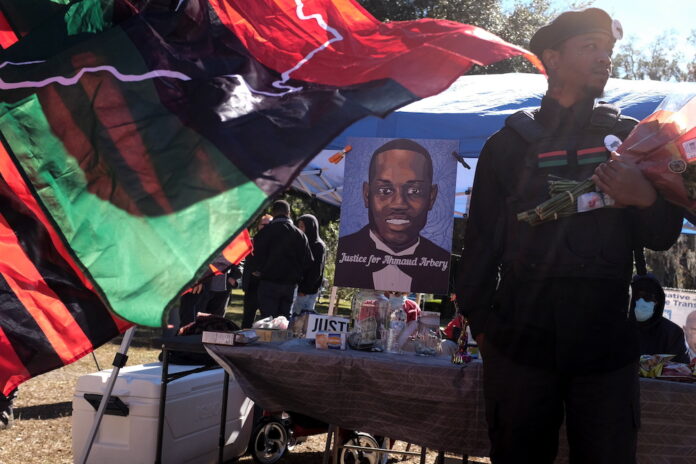 A poster depicting Ahmaud Arbery is seen outside the Glynn County Courthouse while Greg McMichael, his son Travis McMichael and William ‘Roddie’ Bryan are tried over the killing of Ahmaud Arbery, in Brunswick, Georgia November 23, 2021. — Reuters pic

WASHINGTON, Nov 26 — Three white men were found guilty of murder Wednesday for shooting dead an African American man after chasing him in their pickup trucks, following a racially-charged trial in the southern US state of Georgia that gripped the nation.

Travis McMichael, who shot Ahmaud Arbery, his father Gregory McMichael, and their neighbor, William “Roddie” Bryan, who took part in the chase, were all convicted of multiple counts of murder, aggravated assault and false imprisonment.

A predominantly-white jury in Brunswick, Georgia, deliberated for less than 12 hours over two days before delivering their verdicts.

Travis McMichael, 35, Gregory McMichael, 65, a retired police officer, and Bryan, 52, face potential life in prison for the February 2020 shooting of the 25-year-old Arbery.

A crowd erupted in cheers outside the courthouse as the verdict was announced, chanting: “Say his name. Ahmaud Arbery!”

“Today is a good day,” Arbery’s father, Marcus, told the gathering. “I don’t want to see no daddy watch their kid get lynched and shot down like that.”

“Ahmaud Arbery’s killing — witnessed by the world on video — is a devastating reminder of how far we have to go in the fight for racial justice in this country,” Biden said.

The Reverend Al Sharpton, who attended the trial along with Jesse Jackson, another prominent civil rights leader, also welcomed the verdict.

“Let the word go forth all over the world that a jury of 11 white, one Black, in the Deep South, stood up in the courtroom and said, ‘Black lives do matter,'” Sharpton said.

There was only one Black juror on the panel that heard the case, although about 25 per cent of the 85,000 residents of Glynn County are Black.

‘Chose to confront him’

“The spirit of Ahmaud defeated a lynch mob,” said Ben Crump, an attorney for Arbery’s father.

Georgia Governor Brian Kemp, a Republican, said Arbery was “the victim of a vigilantism that has no place in Georgia” and called for “healing and reconciliation.”

A graphic video of the shooting of the unarmed Arbery went viral on social media and added fuel to last year’s protests against racial injustice sparked by the murder of George Floyd, a 46-year-old Black man, by a white police officer in Minnesota.

It took several months for the McMichaels and Bryan to be arrested and they were charged only after the video of the shooting of Arbery was leaked online and sparked outrage.

A local prosecutor, Jackie Johnson, has been indicted for violating her oath of office and allegedly hindering the investigation into Arbery’s death.

During the trial, the defendants said they suspected Arbery was a burglar who had been active in their neighborhood and invoked a since-repealed state law that allows ordinary citizens to make arrests.

But prosecutors said they had no justification for attempting to detain Arbery and never told him they were trying to arrest him as he jogged through their Satilla Shores neighborhood on a Sunday afternoon.

Lead prosecutor Linda Dunikoski said the McMichaels, who were armed with a shotgun and a handgun, and Bryan did not see Arbery commit any crime that day but “chose to confront him” because he was a “Black man running down the street.”

“He was trying to get away from these strangers who were yelling at him, threatening to kill him,” Dunikoski said. “And then they killed him.”

“This isn’t the Wild West,” she said.

The jury was shown video of the McMichaels pursuing Arbery in their truck, and Bryan chasing him in his own vehicle while filming on his cell phone.

At one point, Arbery attempts to run around the front of the McMichaels’ stopped truck.

Travis McMichael, who had gotten out of the vehicle, opens fire with a 12-gauge shotgun. A wounded Arbery is seen struggling with McMichael before being killed by another shot.

Defence lawyers for the McMichaels said they “respected” the jury’s decision and would appeal.

Kevin Gough, Bryan’s attorney, sought on several occasions during the trial to have the judge declare a mistrial, claiming the presence of civil rights leaders Sharpton and Jackson in the gallery was influencing the jurors.

Judge Timothy Walmsley dismissed the motions, saying anyone was welcome to attend so long as they were not disruptive.

The guilty verdicts came just days after the acquittal of Kyle Rittenhouse in another closely watched case.

Rittenhouse, 18, shot dead two men and wounded another during protests and riots against police brutality in Wisconsin last year that followed the police shooting of a Black man.

The teen claimed self-defence and was acquitted of all charges.

The McMichaels and Bryan are also facing federal hate crimes charges in a case that will go to trial in February. — AFP

Facebook
Twitter
Pinterest
WhatsApp
Previous articleHarry Styles is (officially) the top style icon of 2021
Next articleBudget 2022: A stepping stone for job seekers as Putrajaya looks to address unemployment through reskilling and upskilling