Tears, dance as Benin welcomes back looted treasures from France 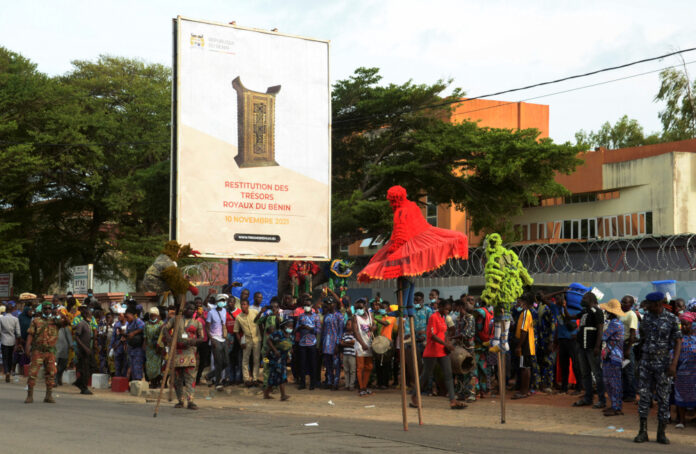 People wait to welcome the convoy carrying 26 cultural artefacts stolen from the Kingdom of Abomey during the colonial era, in a street of Cotonou, Benin November 10, 2021. The Billboard reads ‘Return of the royal treasures of Benin’. — Reuters pic

The artefacts, some considered sacred in Benin, arrived in the economic capital Cotonou by plane before being transported in three trucks, escorted by horses, to the presidential palace.

The return of the artefacts comes as calls mount in Africa for Western countries to hand back colonial spoils from their museums.

In Benin yesterday, hundreds of people from all over the country thronged the streets to watch the treasures arrive.

Adults and children, mostly dressed in colourful loincloths, applauded as the trucks passed, some bowed to the ground, others weeping and crossing their hands in a sign of respect.

“I am devastated with the emotion,” said Benin president Patrice Talon, visibly touched, before delivering a 30-minute speech focused on national unity.

“It is the symbol of the return to Benin of our soul, of our identity,” the president declared.

President Talon and the country’s culture minister had travelled on Tuesday to Paris to bring home the 26 artefacts, part of France’s President Emmanuel Macron’s bid to restore African heritage.

Martine Vignon Agoli-Agbo, a resident of northern Benin, travelled with her two daughters more than 500 kilometres to witness the artefacts’ return.

“I did not want to be told about this moment. And if my children are with me, it is so that one day they will be able to tell their own children.”

“When the truck passed me, I got the chills. I knelt down, out my forehead against the ground, as a sign of loyalty,” Marcel Hounkonnou, a craftsman, told AFP.

“All these objects that these kings, our ancestors, touched, they represent them in a way today,” he said.

Among the works are totem statues from the ancient kingdom of Abomey in the south of present-day Benin as well as the throne of King Behanzin, looted during the sacking of the Abomey palace by French colonial troops in 1892.

When the trucks arrived at the presidency, two small girls, dressed in white and wearing necklaces, spilled water as an offering on the ground.

The crate containing the throne belonging to King Ghezo, who reigned over the kingdom of Abomey between 1818 and 1858, was unloaded on a red carpet.

Dancers performed rituals from the old kingdom, as well as those of the other kingdoms that made up Benin, before it became a nation.

After the ceremony, the current king of Abomey Sagbadjou Glele, present during the ceremony alongside other traditional leaders, told AFP of his immense emotion.

“I cannot explain the joy that embraces me. These objects were intended from their departure to return. Sooner or later they would return so that the words spoken by our ancestors may be fulfilled.”

In France, most African artefacts are held by the Quai Branly museum, which has begun a review of its collection to identify works some say were acquired through violence or coercion.

In Benin, they will be exhibited at several sites, including a former Portuguese fort in Ouidah, while awaiting the completion of a museum in Abomey.

For Didier Marcel Houenoude, Beninese professor of art history, the return of works “represents above all the restoration of dignity”.

It is also “used for the reconstruction of memory. It is not only the people and objects that have been looted, but also memory.”

Some were seized by colonial administrators, troops or doctors and passed down to descendants who in turn donated them to museums in Europe and the United States.

But others were gifts to missionaries or acquired by African art collectors at the start of the 20th century or discovered by scientific expeditions.

An expert report commissioned by Macron counted some 90,000 African works in French museums, 70,000 of them at the Quai Branly alone.

Nigeria said last month it had agreed with Germany on the return of hundreds of so-called Benin Bronzes — metal plaques and sculptures from the 16th to 18th centuries that were stolen from the palace of the ancient Benin Kingdom in present-day Nigeria. — AFP