Suspended sentence for Lyon fan who struck Payet with bottle 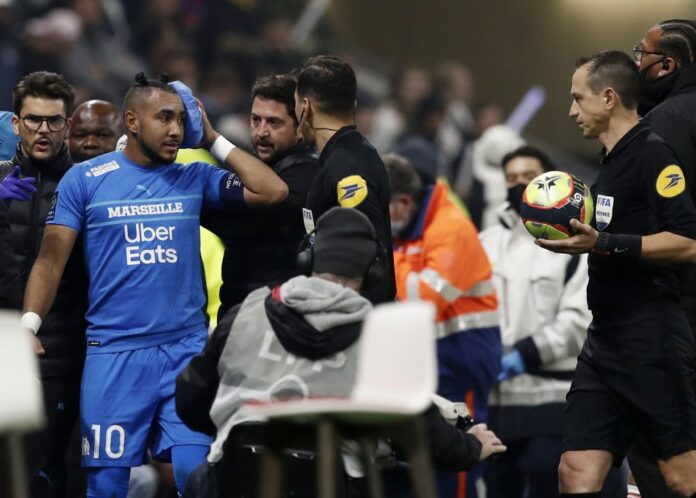 Olympique de Marseille’s Dimitri Payet walks off the pitch injured after being hit by a water bottle thrown by a fan leading to the game being interrupted at the Groupama Stadium, Lyon November 21, 2021. — Reuters pic

LYON, Nov 24 — The Lyon fan who threw a bottle at Marseille captain Dimitri Payet in a weekend Ligue 1 match was on Tuesday handed a six-month suspended prison sentence.

Wilfried Serriere, 32, was also banned from Lyon’s Parc OL stadium for five years as a result of Sunday’s incident.

Payet required treatment after being struck on the side of the head as he prepared to take a corner for the visitors in the fifth minute, prompting both teams to return to the changing rooms.

“I don’t know what was going through my mind,” Serriere told the court in Lyon.

A food delivery driver, he was ordered to pay the Marseille skipper one euro in symbolic damages. He apologised to Payet, and said it had not been his intention to hit him.

On Monday Lyon were instructed to play their next home game behind closed doors ahead of a ruling on the affair due from the French professional football league (LFP) on December 8.

Sunday’s trouble was just the latest in a season blighted by crowd violence, triggering the talks in Paris hosted by Interior Minister Gerald Darmanin and attended by the LFP, club presidents, Sports Minister Roxana Maracineanu and Justice Minister Eric Dupond-Moretti.

LFP chief president Vincent Labrune spoke of the “absolute urgency” to find solutions, with proposals to tackle the problem due to be announced next month.

Payet, who had been heckled by Lyon supporters while warming up before kick-off, was also hit by a bottle during a game at Nice in August.

Nice were docked a point.

Last week Marseille were ordered to play their next home game behind closed doors after trouble against Paris Saint-Germain.

Payet had called for calm from supporters ahead of the match against PSG on October 24, but his appeal fell on deaf ears as both Neymar and Lionel Messi were targeted by projectiles.