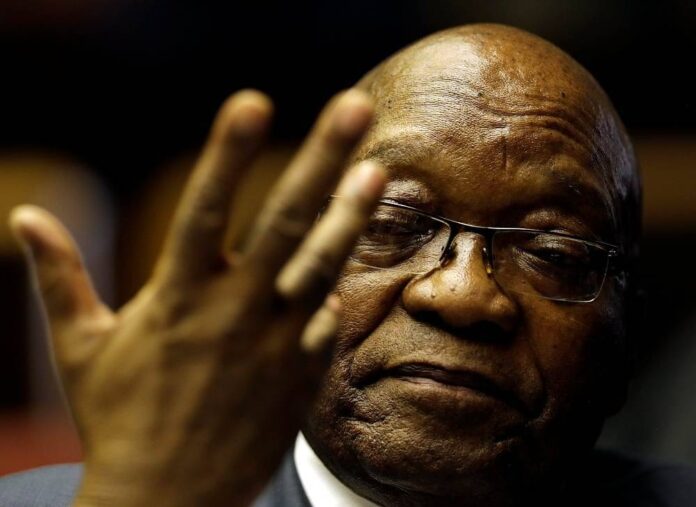 Jacob Zuma may have hoped the commission would ease pressure on him, but his own African National Congress (ANC) forced him to step down one month later to limit the damage to the party. — Reuters pic

From around 5,600 pages spread over six volumes, here are the highlights of the findings and recommendations.

Zuma set up the commission himself, after a damning report by the national ombudswoman about corruption at state enterprises forced his hand. In January 2018, he named judge Raymond Zondo to lead the inquiry.

Zuma may have hoped the commission would ease pressure on him, but his own African National Congress (ANC) forced him to step down one month later to limit the damage to the party.

Hearings started in August 2018. In more than 400 days of testimony, millions of pages of documents, and 300 witnesses, the inquiry incriminated 1,438 individuals and institutions, including Zuma.

Zuma briefly appeared before the commission, but refused to return to answer questions.

South Africans call the web of corruption “state capture” because the organs of state were subverted to serve wealthy people and companies.

The commission accused Zuma of being “a critical player” in the plan to hollow out state firms through the Gupta family of business tycoons, who employed his son Duduzane.

Duduzane became the “conduit” in the graft scheme. Zuma “would do anything that the Guptas wanted him to do for them,” it said.

The ex-president fled the investigators “because he knew there were questions that would be put to him which he would not have been able to answer. This is the antithesis of accountability.”

Zuma’s refusal to testify prompted a showdown at the Constitutional Court, which ordered his imprisonment in July 2021 for contempt.

His incarceration sparked riots in which more than 350 people lost their lives — the deadliest unrest of the democratic era in South Africa. He was released after two months on medical parole.

The report concluded that Zuma and the ANC aided corruption which current President Cyril Ramaphosa estimates cost the country more than $30 billion.

“The ANC under President Zuma, permitted, supported and enabled corruption and state capture,” said the report.

It said if the ANC had not protected Zuma and he had been removed from office sooner, the Guptas would probably have fled the country earlier than 2018 — and would not have looted as much as they did.

“The ANC must take responsibility for this,” the report said.

– ‘Opaque’ Ramaphosa For two days Ramaphosa testified before the panel, but was criticised for some of his “opaque” answers about what he knew of the corruption.

It also said he should have acted on a number of serious corruption allegations that were already public knowledge.

Had Ramaphosa “spoken out firmly” against corruption and wrongdoing, Zuma would have fired him, and that would have given hope to other cabinet members. “The option he chose did not prevent state capture from continuing,” the report said.

Arthur Fraser, an ex-intelligence chief who this month accused Ramaphosa of wrongdoing, is himself on the panel’s list of suspects.

The investigators also recommended a raft of dramatic legal changes.

One proposal would allow voters to directly elect a president. Currently voters elect lawmakers and then parliamentarians vote for a president.

If this recommendation comes into force, it may not prevent a president “similar to Mr Jacob Zuma or even worse”, but voters will have themselves to blame if they choose a person with “no integrity”, the report said.

It also recommended a new racketeering law against abuse of public power, punishable by up to 20 years in prison and a fine of up to 200 million rand (almost RM55 million). — AFP