Sabah Customs foils another attempt to use MASkargo to smuggle drugs 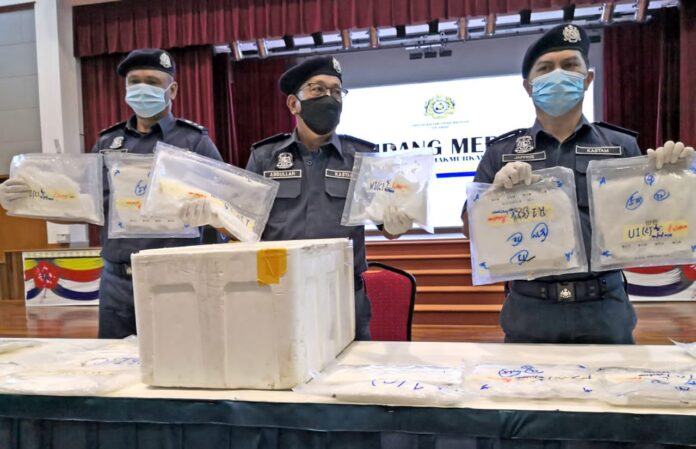 Abdullah (centre) and his officers with the drugs that were seized from MASkargo.

KOTA KINABALU (Oct 6): The Sabah Customs Department has crippled another attempt to smuggle out drugs from the country with the seizure of 12.411 kilograms of drugs worth RM501,026 from MASkargo at the Kota Kinabalu International Airport late last month.

State Customs Department principal assistant director Datuk Abdullah Jaapar said the drugs were seized from 23 polystyrene boxes which were labeled as chilled seafood while going through the scanning machine on Sept 29.

“Safety personnel at MASkargo noticed suspicious images underneath frozen seafood inside the containers.

“Upon further inspection, Customs officers found crystal substances believed to be Methamphetamine and Ketamine drugs wrapped neatly inside 23 plastic packets with each plastic packet well hidden underneath frozen seafood inside a polystyrene box.

Abdullah said although no arrest was made, Customs officers believed this is a new tactic used by drug syndicates to smuggle drugs to neighboring countries.

“The modus operandi of the drug syndicate is to fill drugs into plastic bags and hide it underneath frozen seafood inside polystyrene boxes to prevent from being detected.

“This is the second case whereby drug syndicates are using the same modus operandi,” he said.

The first case was reported on Aug 29 when the State Customs Department seized 8.668 kilograms of drugs worth RM404,375 from the MASkargo at the Kota Kinabalu International Airport.

Meanwhile, when asked if the second seizure was related to the first case, Abdullah declined to comment but said a thorough investigation is currently being carried out.

Abdullah also refused to review the name and address of the sender and its destination as it may jeopardize their investigation.

The case is being investigated under Section 39B of the Dangerous Drugs Act 1952.