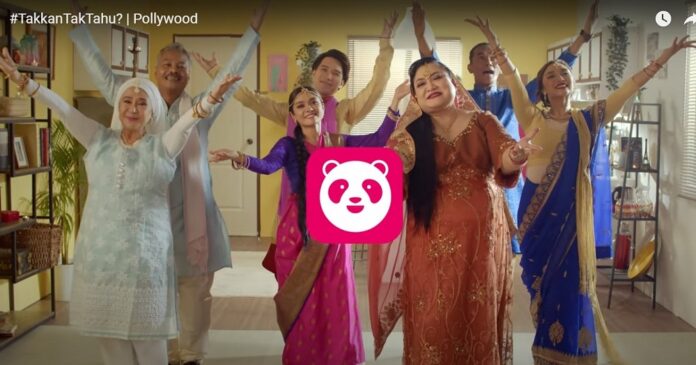 Many have taken to social media to slam Foodpanda Malaysia for featuring an all-Malay cast in a Bollywood-inspired promotional video. – Screengrab via YouTube/foodpandaMalaysia

The online food and grocery delivery platform also said that it was not the brand’s in-house Deepavali advertisement.

Speaking to Malay Mail, Foodpanda Malaysia’s marketing head Vanita Menon Kris apologised for the misunderstanding over the Pollywood video adding that it tells the story of a specific urban Malay household in its upcoming musical videos series.

“As such, Foodpanda would like to take this time to humbly apologise as it is never our intention to cause any discomfort to our consumers as we stay committed to delivering happiness to your doorstep.”

Pollywood, the brand’s Bollywood-themed promotional video featuring an all-Malay cast was slammed online for appropriating Indian culture for not having any artiste of Indian ethnicity in its video uploaded on September 29.

Malaysian actresses Adibah Noor and Nadia Aqilah are also a part of the brand’s promotional video.

It’s more than the lack of Indian representation. Even if there were Indians in this ad, it’s still silly and stereotypical. Sorry to burst anyone’s bubble, but the dance-y Bollywood theme has nothing to do with Deepavali and is not representative of Indian culture in general https://t.co/rsl7xOP5tg

“The music videos online are teasers to a much larger story of main character Seri and the everyday life of a three generational household in a series that will be aired in October,” said Vanita.

“Featuring them going through their daily lives using various Foodpanda joy hacks, multiple musical genres such as Bollywood and K-Pop to communicate the different hacks a consumer can do.”

She added that the minisodes are a celebration of the various musical influences on Malaysia’s local television that have surpassed cultural differences over decades.

“As a diverse and multicultural nation, we have adapted to each other’s cultures and celebrated all things that are uniquely Malaysian.

“The series is part of the brand’s campaign #TakkanTakTahu to educate customers on how to best utilise deals on the application,” she said.