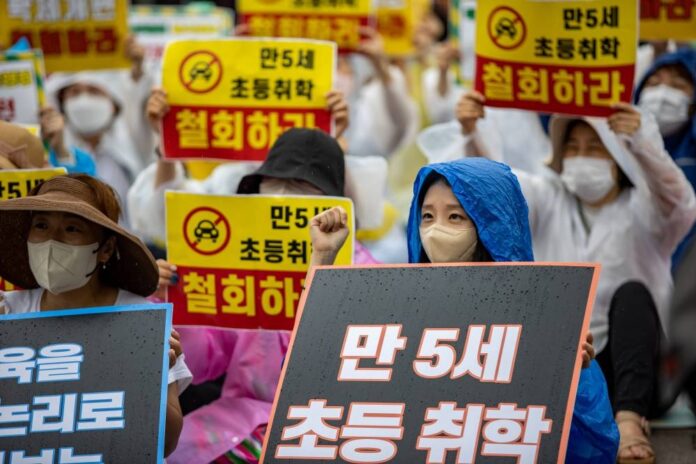 Participants protest in front of the Seoul War Memorial urging the withdrawal of the 5-year-old elementary school entrance reform bill hosted by the Teachers’ Union on August 2, 2022 in Seoul, South Korea. — Photo by NurPhoto via Reuters

SEOUL, Aug 8 — South Korea’s education minister today said she would step down amid a backlash over her proposal to lower the school entry age, presenting President Yoon Suk-yeol with another in a series of personnel setbacks that have ruined his approval rating.

Minister Park Soon-ae’s resignation comes two weeks after the ministry said it would bring forward school enrolment by one year to age five, beginning as early as 2025, if it gained consensus public support. The plan was aimed at expanding the labour force by completing people’s education earlier.

Calling for the plan to be dropped, South Korean parents and teachers groups staged a rally in front of the presidential office last week, saying such young kids were intellectually unprepared and the change would increase difficulty in finding childcare.

“I am responsible for all the controversies, including the reorganisation of school system, and it is all my fault,” Park Soon-ae told a press conference announcing her resignation. “I wish our children (of South Korea) a better future.” Controversy over this and other proposed education changes helped pull down Yoon’s approval ratings down to 24 per cent, the lowest since he took office in May, according to the latest survey by pollster Gallup Korea on Friday.

Respondents cited issues regarding Yoon’s personnel appointments as the biggest reason for marking him down. Other main factors were his lack of experience and qualification, and his arbitrary and unilateral decision-making.

Having come to office promising to restore fairness and common sense in society and to conduct politics of unity, Yoon has been dogged by his selection of key personnel. Several nominees for ministerial posts withdrew from candidacy this year due to scandals including allegations of abuse of power.

Park took office amid controversy over a 20-year-old drunk-driving charge. Two of Yoon’s picks for health minister dropped out after facing allegations of wrongdoing. — Reuters