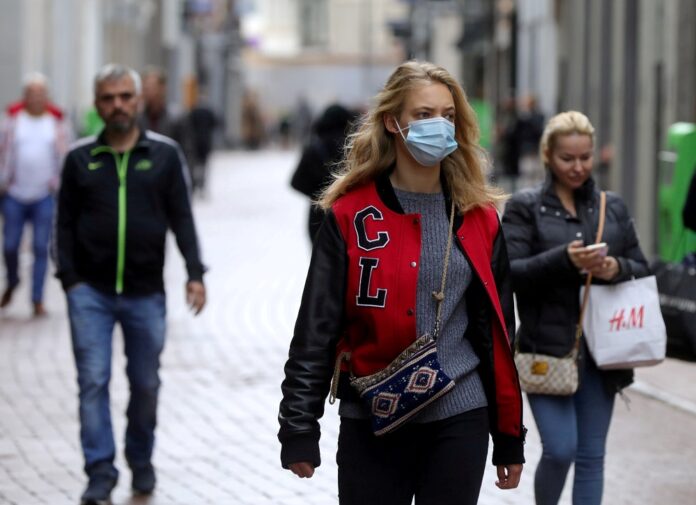 People with and without protective masks walk on the street while shopping in Amsterdam, Netherlands October 7, 2020. – Reuters file pic

THE HAGUE, Nov 26 — The Netherlands is set to tighten its partial lockdown on Friday to curb soaring coronavirus cases, as police prepared for possible new riots against the restrictions.

Prime Minister Mark Rutte is expected to announce fresh anti-Covid measures at a press conference at 1800 GMT, which could include closing bars, restaurants and non-essential shops at 5pm.

New restrictions risk inflaming a tense situation after four nights of unrest across the country, particularly in the port city of Rotterdam where five rioters were shot by police.

“We are keeping our eyes and ears open and we are prepared,” Rotterdam police spokesman Gijs van Nimwegen told AFP.

“We hope things stay calm in Rotterdam and the rest of the Netherlands.”

The Netherlands lifted most restrictions in September, but was forced to reintroduce them as cases reached record levels.

Protests have erupted in The Hague during the prime minister’s last two Covid press conferences, with police using water cannon to disperse demonstrators.

The government brought the latest news conference forward by a week from December 3, saying it was needed to take urgent action.

Dutch media said Rutte is expected to announce the early closure of shops and catering — just two weeks after the government had already ordered them to close at 6pm and 8pm respectively.

But schools were expected to remain open, despite calls to shut doors a few weeks ahead of the Christmas holidays, with the largest rise in cases coming among children aged 12 and under.

Health experts of the Dutch Outbreak Management Team reportedly believed a new closure of schools, as was the case at the start of the pandemic, would be harmful to children.

Citizens are already called upon not to welcome more than four guests and work from home.

Football matches have been closed to the public and traditional fireworks have been banned for the second year in a row.

The government is meanwhile planning to bar unvaccinated people from bars and restaurants under so-called “2G measures”.

An anti-2G protest in Rotterdam sparked the violent riots last Friday in which five people were wounded by police bullets and rioters torched a police car.

The trouble spread to The Hague where protesters hurled fireworks at police on Saturday and to other cities including Groningen in the north on Sunday and Monday.

At least 173 people were arrested nationwide.

Dutch authorities on Thursday said 61 people had died of Covid over the previous 24 hours with some 22,274 new infections reported, some 1,488 less than on Wednesday. — AFP