HomeNationalRespect Malaysians' right to freedom of assembly, activists say after heavy-handedness during...
National 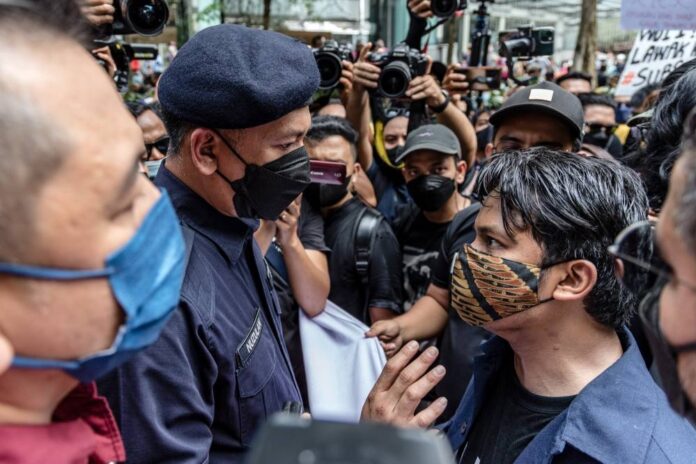 KUALA LUMPUR, Aug 8 — Post Turun rally, activists have once again urged the authorities to respect and understand the constitutional freedom of assembly of Malaysians.

The activists made this call after witnessing authorities’ increased intolerance of peaceful assemblies which have taken place since January this year.

According to Nalini Elumalai of Article 19, there has not been much difference from previous past practices where the police continued to be intolerant of protests and assemblies.

“Article 19 has repeatedly raised concerns that governments have treated protests and other forms of assembly as either an inconvenience or a threat, resorting to unwarranted interference to repress assemblies and post-assembly intimidation.

“In Malaysia, we are witnessing increased intolerance from the state and the police as they ramp up their acts of repression and deterrence towards protesters,” she told Malay Mail when contacted.

Use of public space

She added that authorities have even increased their restrictions on the use of public spaces for protests and assemblies; in particular, protesters are prevented from marching to or assembling at or near Parliament.

“For example, at the lawyers’ march, and recently, when the farmers protested near Parliament.

“The location chosen should be considered integral to its expressive purpose.

“Protests must also be permitted to take place within sight and sound of their object or targeted audience,” she said, adding that by preventing protesters from reaching their intended audience, police are hampering the impact of the assembly, and subsequently, quieting the collective call.

Another concern raised was the deployment of a disproportionate number of police officers, with or without uniform, for a small protest or gathering.

Protesters and police officers face off at the ‘Turun’ protest at Sogo shopping complex, in Kuala Lumpur July 23, 2022. — Picture by Firdaus Latif

Nalini, based on her experience at recent rallies, claimed that Malaysian police have also been targeting new faces in the crowd and intimidating them by asking for identity cards or other documentation.

“Prohibiting individuals from concealing their physical identity during protests amounts to an undue interference with the right to freedom of assembly.

“Any limitations on anonymity in protests, both online and offline, should be justified on the basis of an individualised suspicion of a serious criminal offence,” she said.

She also pointed out that a frequent tactic of the authorities to stymie protests in Malaysia is post-assembly intimidation, which often takes place in the form of criminal investigations under Section 9(5) of the Peaceful Assembly Act (PAA) 2012, which criminalises the organiser’s failure to give five days’ notice before a gathering.

“Section 9(5) is incompatible with international human rights standards as it amounts to an effective prohibition against urgent and spontaneous assemblies.

“The use of this law to intimidate protest organisers and to regulate the use of public spaces undermines the state’s duty to respect, protect and fulfil the right to freedom of assembly and exposes a deep intolerance for protests.

“This government attitude must shift to acknowledge that exercising freedom of assembly is of paramount importance in a democratic society,” she said.

Nalini stressed that notification regimes for protests, like in Section 9(5), should only be voluntary.

She said the purpose of any notification regime should be to allow the government and the police to make the necessary arrangements to facilitate protests.

“Further, organisers should only be expected to submit a notice of intent to organise a protest, never a request for permission to hold a protest,” she said.

Thirty organisers and attendees of the recent Turun rally were summoned by the police to have their statements taken under Section 9(5).

As a member of the United Nations Human Rights Council, Malaysia must demonstrate its commitment to protecting human rights through concrete actions.

“How can the Malaysian government be respected on this international platform when it continues to fail to uphold its human rights commitments at home?” she said.

Similarly, electoral reform group Bersih chairman Thomas Fann said the police need to be reminded that Malaysia is a democracy and not a police state.

“In a democracy, peaceful protests are part of the deal, and our Federal Constitution guarantees it.

“Police are supposed to facilitate a peaceful protest by creating a safe space for participants and managing traffic, not obstructing and intimidating organisers and protesters with call-ups for questioning after each protest,” said Fann when contacted.

He said street protests in the country had never spiralled out of control unless provoked by the authorities, such as Bersih 3 when tear gas and water cannon were used to disperse protesters.

“Protesters are bound to react when they are faced with harsh action taken against them.

“But in the past, we have set precedents where peaceful assemblies were conducted without chaos. One good example is the overnight rally on Jalan Tun Perak or Bersih 4,” said Mandeep when contacted.

However, he said since street protests resumed earlier this year, protesters have been facing resistance from the authorities and not allowed to gather peacefully.

“We can’t even walk for 100 metres. Previously, we still had room for negotiation to walk a short distance.

“In the recent rally (Turun), not only did the police refuse our request for a short march, but also marched towards the protesters, causing a commotion. By doing this, it only invites aggression from the public.

“Police had even set up a human barricade on Jalan Tuanku Abdul Rahman. Was there a need for such a huge reaction from the police over a rally that was attended by university students?” he said.

About 100 people gathered on July 23 outside a shopping mall on Jalan TAR calling for the price of goods to be lowered.

The protesters had also attempted to march towards Dataran Merdeka but were stopped by a police blockade formed by Crime Investigation Department (CID) personnel and forced to disperse.

According to protesters present during the Turun rally, the presence of CID personnel was a first. During previous street rallies, including the lawyer’s march, Light Strike Force personnel were deployed.

When contacted for a clarification on whether there was a change of police personnel deployment, Kuala Lumpur police chief Datuk Azmi Abu Kassim said there were no new standard operating procedures, and the present ones were under PAA 2012.

However, Article 10(2)(b) provides that Parliament may pass a law to restrict this right in the interest of security and public order.

“We now have the PAA, which came into force on April 23, 2012. Section 4 of PAA states that the right to organise/participate in a peaceful assembly shall not extend to non-citizens and anyone below 21 years old.

“Sections 6 to 8 go on to talk about the responsibilities of the organisers, participants and police in a peaceful assembly. Part IV of the PAA imposes more conditions such as notification must be given by the organiser to the police five days before the date of the assembly [Section 9(1) PAA].

“Although this section was amended in 2019 (previously 10 days’ notice), this is still not in compliance with the international standard such as Article 21 of International Covenant on Civil and Political Rights (ICCPR),” said Kee, before adding that Malaysia, however, is not a signatory to ICCPR.

She also pointed out that at present, there are two conflicting Court of Appeal decisions on whether Section 9(1) — requirement of the notice — is constitutional.

She cited Nik Nazmi Nik Ahmad v. Public Prosecutor [2014] 4 CLJ 944 that unanimously affirmed the constitutional liberty to assemble peaceably. The Court of Appeal held that Section 9(5) is inconsistent with Article 10(2) of the Federal Constitution.

However, in Public Prosecutor v. Yuneswaran Ramaraj [2015] 9 CLJ 873, the Court of Appeal held that Section 9(5) is constitutional.

Despite the two conflicting court decisions, Kee said the recent trend shows that police will summon the parties involved in a rally to give their statements for investigation into failing to give notice [Section 9(5)], failing to comply with the restrictions imposed by the OCPD under the PAA, or during MCO, many were investigated for breaching the movement control order rules.

“The most recent case we have seen that the public prosecutor actually charged the individuals in court perhaps is this case,” she said.