HomeEntertainmentRescued from a US puppy mill, Lolly the dog now helps other...
Entertainment

Rescued from a US puppy mill, Lolly the dog now helps other canines get over fear of humans (VIDEO) 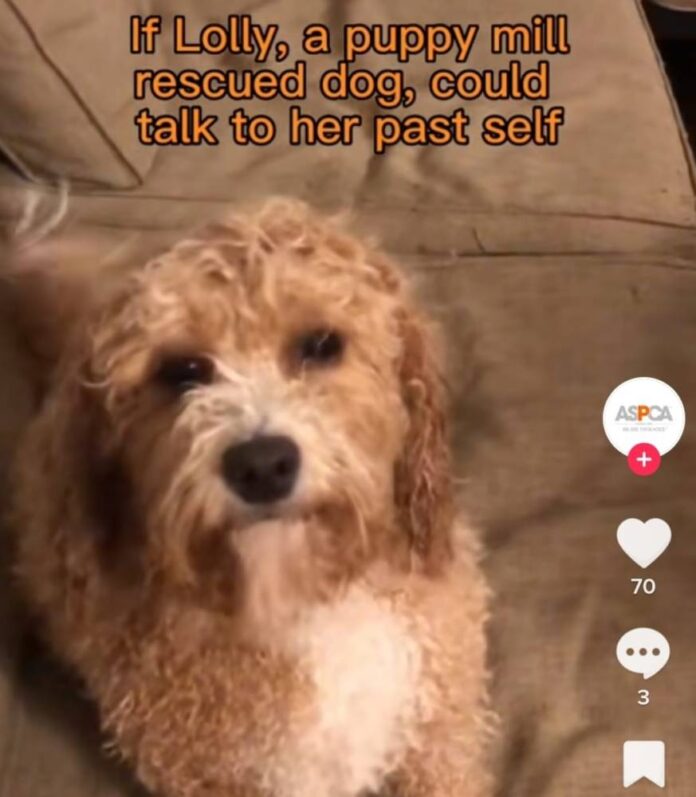 Herself a rescue from a puppy mill, Lolly the miniature goldendoodle now helps other dogs rescued from other puppy mills. — Screen capture from TikTok/ aspca

KUALA LUMPUR, Nov 14 — A year ago, Lolly was rescued by animal welfare group American Society for the Prevention of Cruelty To Animals (ASPCA) from deplorable conditions at a puppy mill in Iowa.

Today, the miniature goldendoodle is a “helper dog” at the ASPCA Behavioral Rehabilitation Center (BRC) in Weaverville, North Carolina, where she guides other fearful dogs.

According to the ASPCA, Lolly had matted fur, internal parasites, dental disease, and a severe infection when she was rescued.

After treatment, Lolly was transferred to the BRC to address her avoidant behaviour toward human interactions and walking on a leash, People reported.

@aspca One year ago, Lolly and her puppies were among more than 500 dogs rescued from a horrific puppy mill. All she knew was overbreeding, cold cages, no human interaction, and little to no vet care. She was scared and didn’t trust humans. Eventually, she became more social with handlers, even seeking out pets and treats. She is now in a wonderful home, where she receives nothing but cuddles and love. Lolly and many of the dogs who were rescued have found loving homes, but so many suffered in that cruel puppy mill before they could be rescued. Help us end puppy mills by visiting the link in our bio! #fyp #aspca #foryoupage #puppymill #puppymillsurvivor #dogsoftiktok #dog Somewhere Only We Know – ~Barbie Movies~

Lolly’s behavioural rehabilitation specialist at the BRC, Darren Young, said initially, Lolly was nervous and pacing, her stress even causing her paw pads to sweat.

“Our team employed evidence-based training methods to help Lolly learn to create positive associations with new people and places, and walk on a leash.”

As time passed, she began to come out of her shell and she eventually was more excited to work with her handlers and began to solicit their attention.

Lolly has been adopted by Dr Ashley Eisenback, the senior director of veterinary services at the BRC.

While Lolly no longer needs the BRC’s services, she still visits the centre often.

“Lolly pays it forward by coming to work with me at the BRC often to serve as a helper dog for other dogs moving through the programme. She also helps me teach children who are afraid of dogs, that dogs are kind and gentle,” Dr Eisenback said.

“Helper dogs can act as guides, showing a fearful dog how to walk on a leash, jump into a car, or even how to happily engage in play.”

“The helper dog often gives the fearful dogs the confidence they need to interact with people and their environment. This, in turn, helps them to feel more relaxed and allows their personalities to blossom,” Young added.