HomeNationalReport: PKR to field 'big guns' against defectors in GE15; seats include...
National 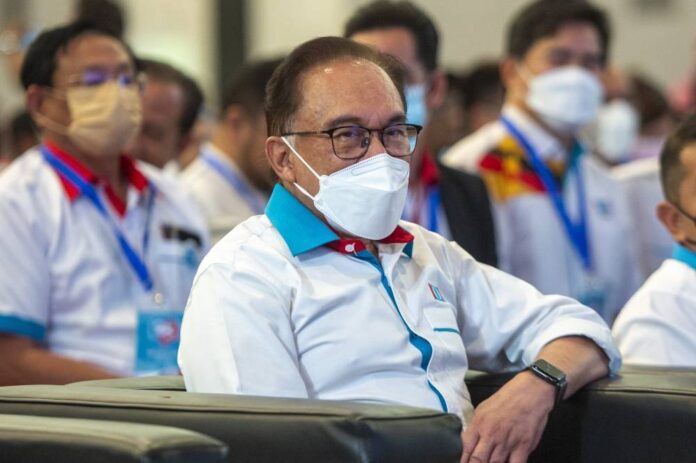 Anwar said PKR has been receiving positive feedback from voters during its recent roadshows in certain contentious areas. — Picture by Shafwan Zaidon

KUALA LUMPUR, Sept 23 — PKR president Datuk Seri Anwar Ibrahim is planning to bring out the “big guns” at the next general election to reclaim the parliamentary seats won by its former members who have since switched political parties.

The federal Opposition leader said this would send a clear message to the “Sheraton Move” MPs who won those seats under the PKR banner in Election 2018, Malaysiakini reported today.

“We can’t blame the general public for being critical, cynical or disillusioned with the ‘Sheraton Move’. We have to tell them that the culprit should be punished,” he told the news portal in an interview.

Anwar said PKR has been receiving positive feedback from voters during its recent roadshows in certain contentious areas, and even his own Port Dickson parliamentary constituency.

“I am very pleased. For the past few months, particularly after PKR events in Gombak, Kuala Pilah and Port Dickson, and Rafizi’s programme in Johor, you can see the enthusiasm and excitement,” he told the news portal, referring to PKR deputy president Rafizi Ramli.

Anwar attributed the positive public reception during PKR’s roadshows to his party’s inclusive policies for all communities in the country that promote common values and a national agenda.

He rejected the notion that PKR’s progressive vision is distant from sentiments dear to the Malay heartland where parties like Umno and PAS have long dominated.

“That’s what they said six decades ago when Onn Jaafar broached the idea of Malay identity.

“After 60 years, we have to work hard because, if we have weak leaders who are sacrificing these core values, humanity and constitutional guarantees, then we will not progress or succeed.

“I am optimistic because the assumption that the Malay heartland is not with us is not entirely true. For example, Kangar has 58 per cent Malays and Kuala Kedah 80 per cent Malays. And we won comfortably,” he was quoted as saying.

The Pakatan Harapan chairman (PH) said the coalition is also open to working with non-component parties for the upcoming general election but indicated that it is unlikely to partner Tun Dr Mahathir Mohamad again as voters have grown more sceptical of temporary alliances for political expediency.

He noted that Dr Mahathir’s reluctance to follow a tacit agreement to hand over power after Election 2018 triggered the collapse of the PH government.

“I think if we go through with the idea of working with Mahathir again, the people will be critical. What is the reason? Is it the purely political expediency that you think you can only win by working with them?” he was quoted saying.

Anwar also said that Dr Mahathir’s race-based approach to politics was not in line with PKR’s own policies.

“They talked about Malay unity, or Malay-based party, or Malay agenda, which I have questioned.

“I would say the Malay concerns are also our concerns, but we have to transcend beyond that and deal with the core issue that affects the Malays, i.e. poverty, marginalisation and inequality.

“The Malay agenda has been hijacked by the corrupt elites,” he was quoted saying.