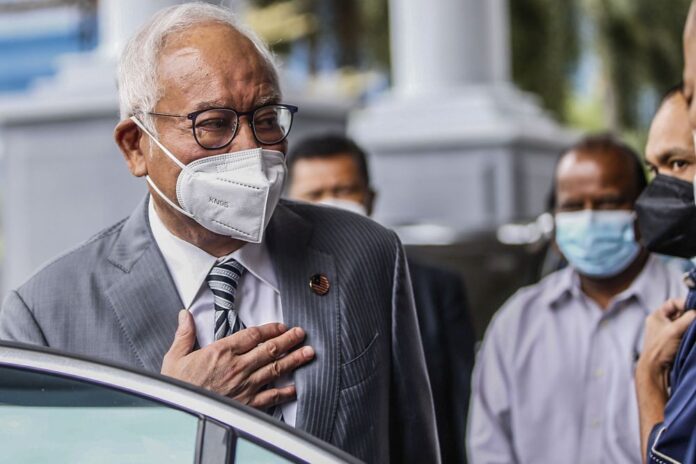 Najib said this in response to Washington DC-based International Consortium of Investigative Journalists (ICIJ) and its partners’ reporting on the Pandora Papers regarding his involvement, together with that of international law firm Baker McKenzie and its local affiliate — Wong and Partners and B&M Consultancy Services — which provided legal and corporate services for 1MDB.

Furthermore, Najib said he had relied on top financial and legal firms like Goldman Sachs, KPMG, Ambank and Wong and Partners as well as the 1MDB board to alert him of any red flags.

“I was comforted that these are big brand name firms and that they would have alerted me or the board of 1MDB should there be any red flags. However, such warnings never came,” he was quoted as saying by Malaysiakini.

Insisting that he was misled by his adviser, Najib reiterated he never had direct dealings in 1MDB’s affairs which he has consistently denied knowledge of any wrongdoings in the 1MDB scandal previously.

“Never had any contact. Not even once. I do not deal with 1MDB or the firms that 1MDB engaged and relied on the senior management and the board of directors to carry out their duties,” he said.

One such example he cited was that he had zero involvement in the selection of Baker McKenzie, Wong and Partners, and B&M Consultancy Services.

According to him, the board of the Terengganu Investment Authority (TIA) — as 1MDB was known before it was renamed — made the selection.

“The firms were selected by the TIA board of directors upon deliberation by the directors and as recommended by the senior management along with Goldman Sachs, Ambank and KPMG. This was before TIA was put under the federal government, and I became involved in 1MDB.

“All these engagements started when the company was still named TIA and were continued by the senior management and board of 1MDB,” he said.

This, he said, was attested through settlements and penalties paid by the aforementioned firms and not him which ruled out his role as the mastermind behind the scandal.

He also expressed confidence that his guilty verdict over the misappropriation of RM42 million SRC International Sdn Bhd funds would be overturned on appeal.

“I was accused and convicted (of having) abused my powers by being involved or (taking) part in a Cabinet decision to approve a government guarantee of RM4 billion for SRC in the year 2011. I was not accused of proposing or approving the loan to SRC.

“I was then accused of money laundering when a total of RM42 million (or 1.0 per cent of the guarantee) from SRC was deposited into accounts under my name in stages four years later between late 2014 and middle of 2015 which the judge then confirmed was paid for various charitable and political use — not for my personal use.

“In a nutshell, this meant that I was found guilty in the SRC case of having to wait four years and having to win the general election and Umno party elections in 2013 to receive 1.0 percent of the said guarantee in stages which I did not use personally,” he claimed.

However, Najib will only serve 12 years in jail as the judge ordered all the jail sentences to run concurrently which he is now appealing against.

He is currently appealing his conviction at the Court of Appeals.