HomeNationalProsecution: Were Zahid, wife thinking of Malaysia's poor people while shopping at...
National 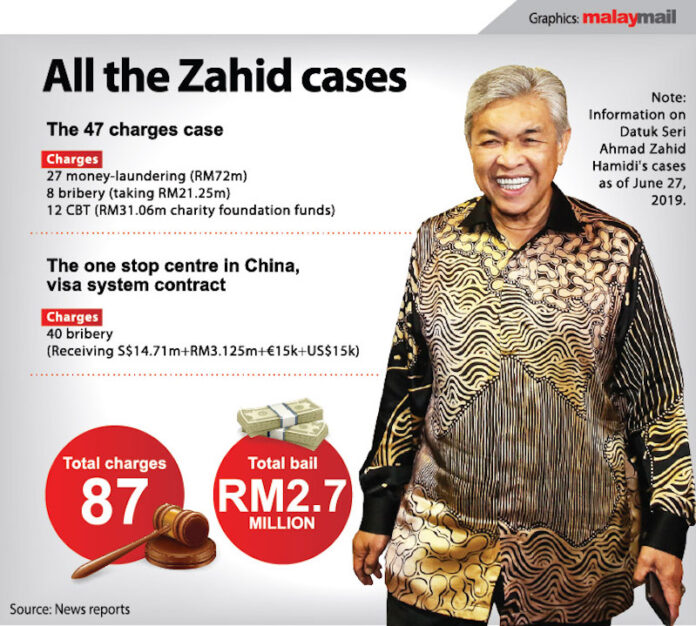 KUALA LUMPUR, Oct 13 — The prosecution today questioned if Datuk Seri Ahmad Zahid Hamidi and his wife were thinking of the poor in Malaysia when they went shopping at brands associated with luxury goods.

The prosecution said this when highlighting bankers’ evidence of more than RM1.3 million of charitable foundation Yayasan Akalbudi’s funds having been used to pay the credit card bills of Ahmad Zahid and his wife.

The prosecution previously submitted evidence that 43 cheques in Yayasan Akalbudi’s name had been issued to make payments between January 2014 to January 2016 for the credit card bills.

Lead prosecutor Datuk Raja Rozela Raja Toran acknowledged that the couple’s spending habits would not be part of the legal issue involved in proving the criminal breach of trust charges against Ahmad Zahid, but remarked on the shopping shown.

“When we look at the credit card statements themselves, My Lord, we will be able to see the spending habits of the accused and his spouse.

“Although I admit that this is not an issue, their spending habits is not an issue in our case, My Lord, but one cannot help but wonder whether they had in mind the poor people in Malaysia when they went shopping in Giorgio Armani, Louis Vuitton or Hermes,” she told the court.

Yayasan Akalbudi is a foundation aimed at eradicating poverty and enhancing the welfare of the poor. It is registered with the Companies Commission of Malaysia, with Ahmad Zahid being a trustee as well as subsequently from June 2013 onwards the sole authorised person who could sign on the foundation’s cheques.

Ahmad Zahid is accused in this trial of having committed criminal breach of trust involving more than RM31 million of Yayasan Akalbudi’s funds, including over RM13 million paid out using 50 cheques — including the 43 cheques for credit card bills.

The Ambank credit card statements had shown that the credit card was used both locally and globally, including Indonesia, Vietnam, South Korea, Taiwan, Hong Kong, Australia, US, UK, Italy, Ukraine and Dubai in the UAE.