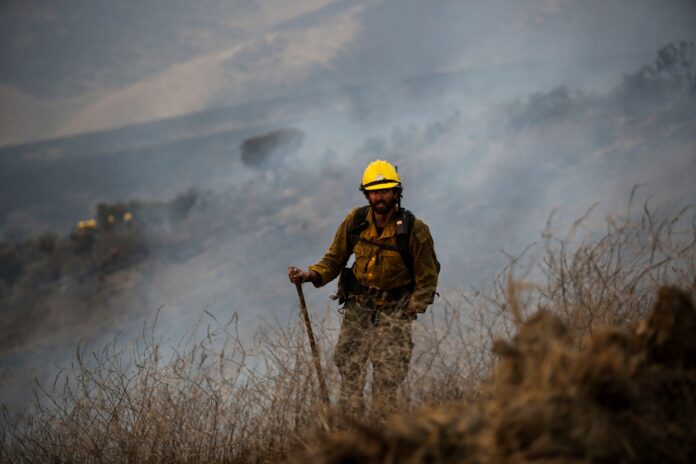 SANTA BARBARA (California), Oct 14 – California firefighters took advantage of a break in strong winds on Wednesday to get aircraft aloft and dump retardant on a fast-moving wildfire that was within a half mile of former President Ronald Reagan’s ranch, officials said.

A crew of roughly 1,500 firefighters have so far successfully steered the Alisal fire away from the Reagan ranch, where the former US leader hosted the likes of Queen Elizabeth and former Soviet leader Mikhail Gorbachev, said Andrew Madsen, a spokesman for Los Padres National Forest, where the blaze is centred.

“There are forecasts of high winds tonight, and we’re trying to get as much as we can done before then,” Madsen said.

The crews are also working to keep the fire away from a shuttered Exxon Mobil facility in Las Flores canyon, he added. The company said in an emailed statement that it was closely monitoring the fire and there were no injuries at the facilities or damages to the facilities, which have been shut since 2015.

The fire, which broke out on Monday about 20 miles (32km) northwest of Santa Barbara in a sparsely populated corner of southern California, has grown to 15,500 acres (6,272 hectares) and remains just 5 per cent contained, Madsen said.

Firefighters had hoped to take advantage of the lack of high winds to increase the containment line, Madsen said, but by evening they had not made any ground on the percentage.

The Alisal fire quickly grew on Tuesday amid strong winds, shutting down a section of a major highway and commuter train lines. California Governor Gavin Newsom said yesterday the state had secured federal funds to reimburse 75 per cent of local and state costs related to fighting the blaze.

California is on pace to suffer more burnt acreage this year than last, the worst fire season on record when 4.2 million acres went up in flames – an area the size of Hawaii. – Reuters