HomeNewsPeople Are Angry At Jaya Grocer For Closing Its Puncak Alam Outlet's...
News

On Wednesday, 2 December, Jaya Grocer opened its newest outlet in Eco Grandeur, Puncak Alam, Selangor. However, soon after the entrance to its non-halal section was boarded up, according to photos.

The photos were posted on 3 December by Jeram assemblyperson Mohd Shaid Rosli.

The local assemblyperson, who quit Bersatu in August to join PEJUANG, sent a memorandum to the management of the Jaya Grocer outlet in Eco Grandeur, Puncak Alam, stating that he has received complaints from the local residents who objected to the sell of alcohol at the newly opened outlet.

According to Mohd Shaid, the protest against the non-halal section was based on several factors including “respecting the sensitivities of the 90% Muslim population in Puncak Alam”.

Other factors included complaints of social crimes and fractured family relationships from drinking alcohol, and cases vandalism on public recreation places which were littered with liquor bottles, he stated. 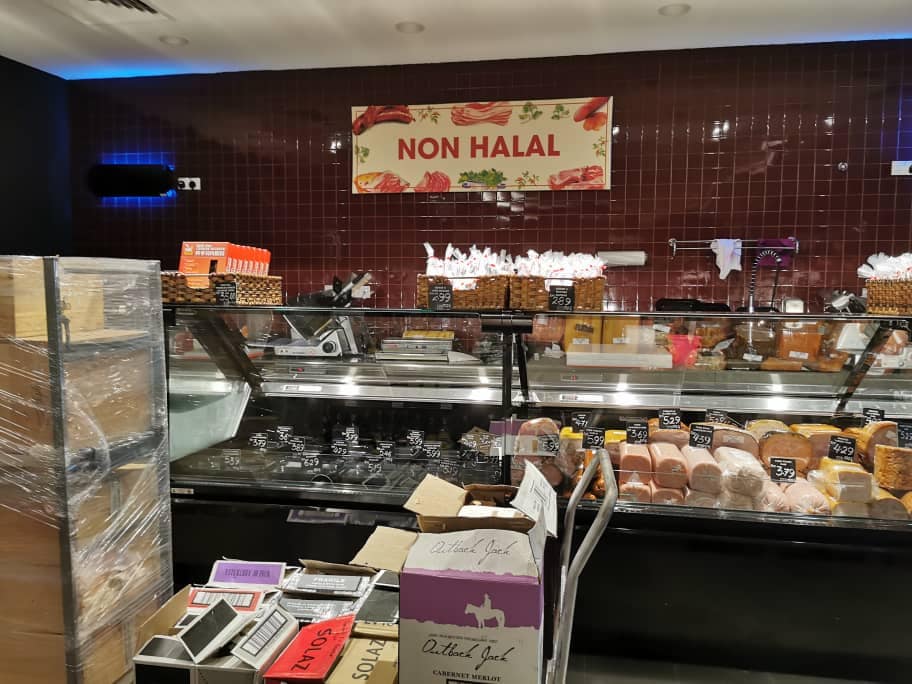 In his Facebook post, Mohd Shaid said Puncak Alam is “Malay territory” and that the management basically agreed to not sell alcohol

“Based on cooperation that they (Jaya Grocer’s management) have given us, we can continue to support (their business) by shopping there,” he wrote in the post, that largely received supportive comments.﻿

As news about the closure of the non-halal section spread, Jaya Grocer assured its customers that their concerns have been heard

However, it has done little to assuage people’s anger

Hundreds of them have since left comments on the supermarket chain’s social media posts.

Some questioned whether the management is discriminating against non-Muslim patrons.

“I won’t step in Jaya Grocer Puncak Alam and any other JG outlets from today onwards. Not keen on spending my money to support a business who give in to a racial bully,” wrote one.

“Why did you open here? As a ‘big’ supermarket, you should give convenient to all residents, shouldn’t be for specific ‘people’. Very disrespectful to our Chinese and Indian race,” remarked another.

“Malaysia is a multi-racial country. Please respect our non-Muslim rights. Don’t affect your company’s prospects because of those stupid people’s words. If your company insists not to sell alcohol or pork. I will not step into your shop. I believe many people will not,” another person said.

“Caving to a bunch of racists. Good, discriminate against non-Muslim. We don’t deserve the same rights as the majority. What’s next, Nazi-style camps for non-Muslims?”

In Jaya Grocer’s different post about celebrating Christmas, customers left comments in which they shamed the supermarket chain for its apparent hypocrisy amidst the controversy. 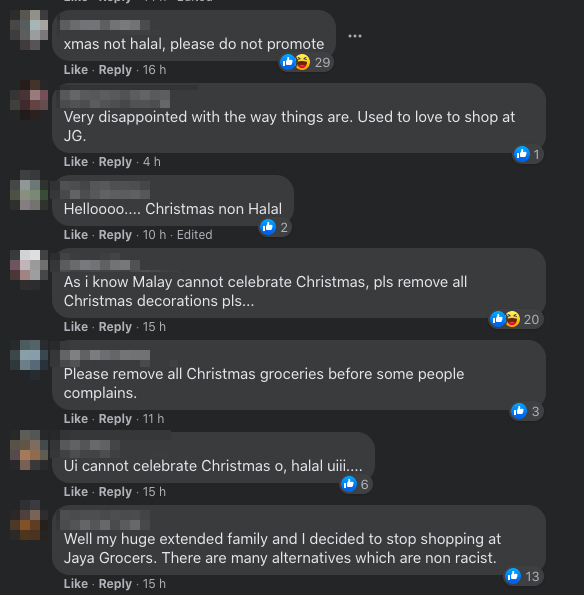 Others also called for a boycott against Jaya Grocer

“What in the world were you thinking, Jaya Grocer? Anyway, how sensitive is this? We seem to only be sensitive to one group of people. What about the sensitivity of people from other faiths … This is the silliest, stupidest, insensitive gesture I have ever come across. No, forgive me, I tell a lie. It is one of the many silliest things happening in this country. I may only be a drop but I have decided never to set foot in one of your supermarkets,” said one.

“Astonishingly ashamed of your cowardness, Jaya Grocer, on adhering to the racist Puncak Alam YB. A YB that says this is Malay territory. Thankfully I’m staying in MALAYSIAN territory,” added another.

“Shame on you. We will boycott you because you have no principles or respect for minority rights. You are complicit in tyranny,” another customer remarked.

“As a big corporation, you guys should stand up for human rights and not give in when threatened by extremists. Please, do the right thing and be responsible. The laws of the country are clear on the sales of alcohol. You don’t need to give in to some local ADUNS taking the extremist stand. You might be facing boycotts campaigns from Malaysians if you fail to stand up for what is right,” said another.

Recently, a warehouse in Johor was found to be supplying illegally imported frozen meat with fake halal labels to the local market:

Meanwhile, a three-decade-old Malaysian brand has been a victim of allegations that it does not sell halal products despite its certification:

OldTown White Coffee was also recently accused of serving pork in its curry noodles but the claim has since been disproved: